Not too far from Barry Stimson’s workshop, another two Mini derivatives with bold Beach Buggy styling were conceived at around the same time. From Poole came Neville Trickett’s more traditionally styled Siva Buggy. Trickett had been responsible for the sporty MiniSprint in the mid-sixties. By 1970, however, he came up with his Mini based Buggy. It hadn’t gone unnoticed to him, too, that Volkswagen based Beach Buggies were becoming a hit and as an answer he made his own version. For the price of £195 the customer bought a kit to build one himself. It included a fibreglass body and a steel tube chassis frame that carried most of the Mini’s suspension. Radius arms were lengthened while the Mini’s suspension trumpet cones were shortened. Headlights and rear lights were included too. The complete front subframe with engine from a donor Mini could be bolted in, and some more Mini-parts like instruments, pedals and wheels could be re-used. Bucket seats, a flat windscreen in an aluminium frame and black vinyl hood all were extra’s, as were 13-inch wheels that gave the Buggy a better appearance then the Mini’s standard 10-inchers. 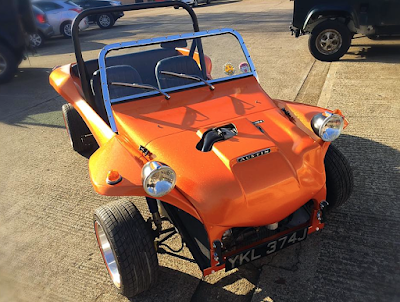 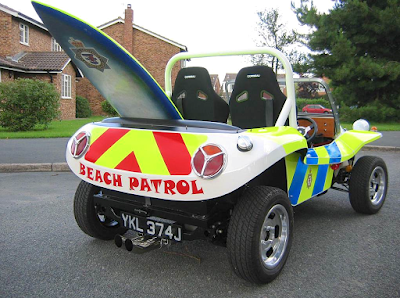 And another in 'Beach Patrol' livery. Pity it was photographed on the tarmac though!
Picture Siva Moonbug Skyspeed register 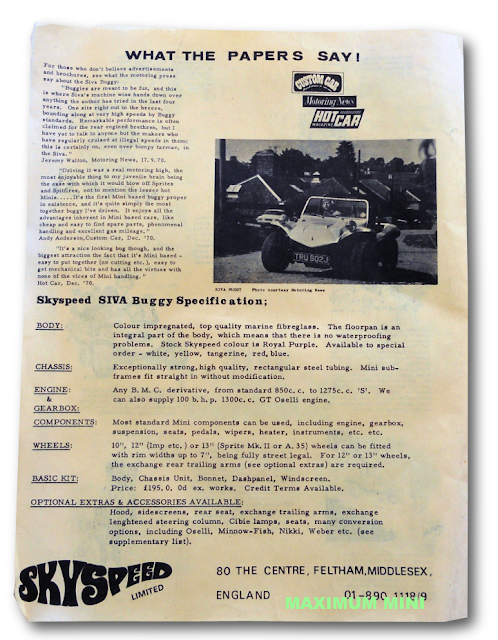 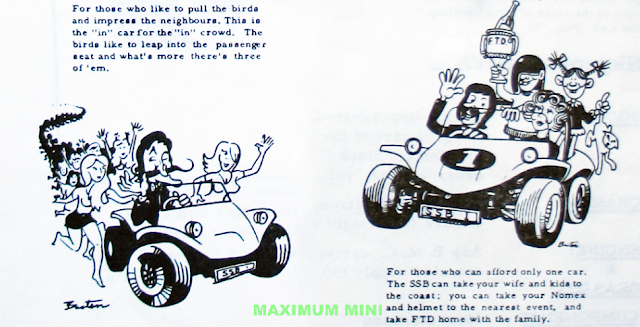 
Trickett was soon fed up with his Buggy customers and decided to have the car distributed by a motor accessory company who offered it as the Skyspeed-Siva Buggy. They sold quite a few before the moulds and production rights were sold to Euromotor in Amsterdam who had been Siva-importer for some time. Euromotor started building cars offering them as the Siva Moonbug. By now purple had become the standard colour with other colours available for extra money. They carried on production until 1976 when a fire destroyed the Amstelveen (close to Amsterdam) premises and the original moulds. 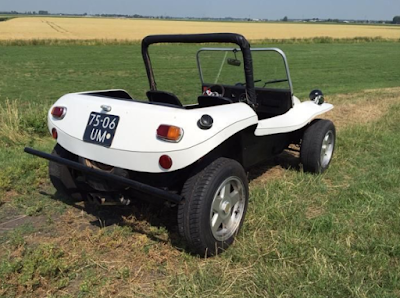 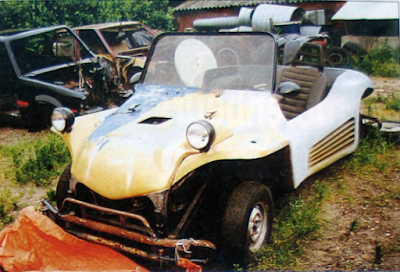 This is another Dutch car, found much modified on a Dutch scrapyard in the 1980s
Picture Jeroen Booij archive 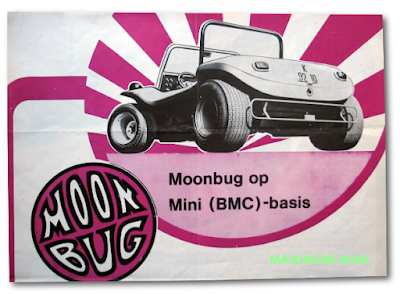 
Then there was illustrator Mike Jupp, just further eastwards along the south coast. Jupp was asked to design a car in 1969 that had to be based on Mini-mechanicals and was supposed to be a beach buggy-style fun car too. He liked the idea of what he now calls a ‘Juppmobile’ and started drawing. Intrigued about World War II-machinery he says he was influenced by the Volkswagen Kübelwagen and Schwimmwagen so perhaps it is not surprising the Nimrod he designed had some similarities with amphibians. The Nimrod-name derived from the famous Nimrod fighter planes. Together with carpenter Ray Jay of Hunston he started working on a prototype from his parents farmhouse, but when he was half way finished the men who had come up with the idea for the car withdrew from the project, leaving Jupp and Ray behind with nothing but a half-finished car. The two now decided to put it on the road themselves. It wasn’t until 1972 that it actually was ready. The ladder frame chassis came with a floor of plywood while the roll bar was made from a scaffold tube. The fibreglass body was an open two-seater with high sills and no doors. Between the windscreen and the rear screen there was a bar to give the body a bit more strength and a black vinyl roof was attached to it. Headlights and rear lights came from the Hillman Hunter and a Minivan petrol tank was fitted. Jupp admits that he wanted to give the car as much ‘Beach Buggy looks’ as he could and designed chunky rear mud flaps to add to the impression of wide tyres! Jupp took delivery of the car and even drove it to Transylvania in 1974 with a trailer behind it to carry tent and gear. When a friend asked for a second car Jay began to think about limited production, eventually building another four Nimrods. Years later the car was offered again in 1979 by Nova Cars, but it is unknown whether they ever sold any cars. Nigel Talbott and his company ‘T.A.C.C.O.’ in Wincanton did build a few another two years later, but it is believed not more then fifteen Nimrod were build in total by 1986, by which time the car had disappeared. 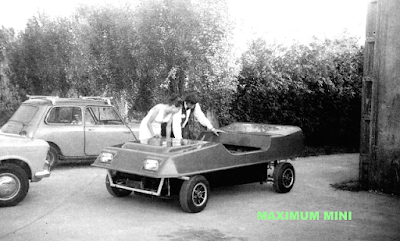 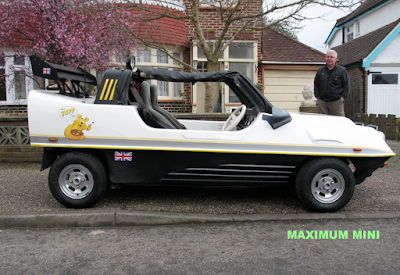 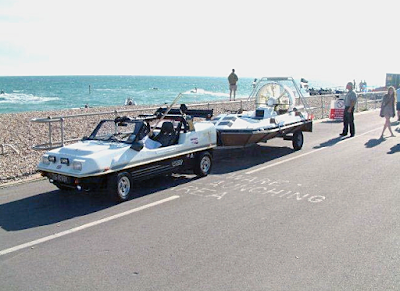 And the same car seen where it belongs: on the seaside. Here towing a small hover craft!
Picture Mike Jupp 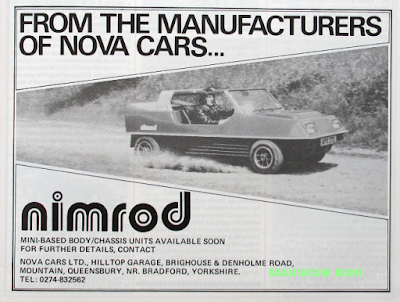 Nova Cars marketed the Nimrod for a while, but they didn't produce many
Picture Jeroen Booij archive