Gyro-X to star at Pebble Beach

Pebble Beach, no doubt the world’s most prestigious concours d’elegance, will bring together another grand parade of prestigious four-wheelers on the 20th this month at the Californian golf resort with the same name. But there is always some unexpected stuff, too. Enter this year's class ‘American Dream Cars of the 1960s’ - all about future visions of days long gone, when the imagination of car builders went wild over shapes and technologies. And it's this class that will show a Mini derivative!

It's the Gyro-X, unveiled by Gyro Transport Systems, Inc. of Northridge, California, in 1967. Jeff Lane of the Lane Motor Museum in Nashville, Tennessee has set himself to the task of restoring this most unusual vehicle after having found it in a rather horrid state with VW power and without the gyroscope that made it such an attraction originally. I asked Jeff to write down something on the car and this is what he sent over:

"The 1967 Gyro X is the brainchild of Thomas Summers and Alex Tremulis, respected leaders in their fields - Summers a gyroscope expert and Tremulis with automotive styling and design.
In California in 1961, Summers formed Summers Gyrocar Company as a subsidiary of Summers Gyroscope Company, which made instruments for the aircraft industry. Summers’ passion and dream was to build a practical gyroscopically-balanced car. In 1963, Summers Gyrocar Company received funding from the U.S. Department of Agriculture to build the Gyro Stabilized Cargo Carrier. In 1965, prototypes were completed and tested. It is believed about five were built, then the U.S. Department of Agriculture withdrew funding. Meanwhile, Alex Tremulis, acting chief of Ford’s Advanced Styling Studio, was also interested in gyroscopically-stabilized vehicles. In 1956, Tremulis conceived the Ford Gryon, and in 1961 it was built as a concept car. Tremulis wanted to make the Gyron fully functional, but a quote of approximately $135,000 (that’s over 1 million dollars today) to build the gyroscope and control system, stopped that from happening. Ford’s Gyron was displayed at the New York International Auto Show in 1961, remaining on display at the Ford Rotunda in Dearborn, Michigan until November 1962 when the building burned down, destroying the vehicle.
Around 1966, Summers and Tremulis joined forces to build the Gyro X. Summers Gyrocar Company raised $750,000 (5.7 million today) and construction soon began. Tremulis styled the car, and the shop of Troutman-Barnes built the complete car minus the gyroscope and control system, which of course was built by Summers’ company. By early 1967, the Gyro X was completed and shown at the “Wonderful World of Wheels” exhibit at the New York International Auto Show. The task of commercializing the car then started, but met with no success. Investors sued to recover the money spent to build the car, and Summers Gyrocar Company closed its doors in 1970.
Once Summers Gyrocar Company closed its doors, the next several years were filled with lawsuits. Tom Summers and Alex Tremulis remained close, as well as enthusiastic about the gyroscopically-stabilized vehicle concept. Summers retained ownership of the car and continued to promote it. He developed numerous projects around gyroscopically-stabilized vehicles in order to get additional funding; none of this work went past the concept stage.
The Gyro X appeared in Nevada in 1975, and from there Summers became involved with some shady Las Vegas promoters who promised to put the car into production. By now the car is a three wheeler (two in back) and the gyroscope is most likely gone.
The Gyro X reappears in 1994 when a Las Vegas company uses it as collateral in a business deal gone bad, and entertainer John Windsor obtains the car in that same year. The car sat on his property until 2004, when he gets it running (still a three wheeler with no gyroscope). He sold the car in 2009 to an eclectic car collector in Houston named Mark Brinker. Brinker planned to restore the car, but after two years decided restoration was unrealistic. In 2011, Brinker sold the Gyro X to Lane Motor Museum.
Lane Motor Museum spent the next six years reconstructing the car to its original configuration. Agency Impianti, an Italian company, built the gyroscope and control system that make the Gyro X a functional gyroscopically-stabilized vehicle once more."

"How a Gyroscopically-Balanced Car Works and Some Basic Specifications on the Gyro X
In the simplest terms, a large flywheel spins to balance the car. Sensors in the car measure its angle of lean, and when the car goes around a corner, a hydraulic ram moves the spinning flywheel on its vertical axis to change the lean angle of the car.
The 1967 Gyro X is 44” wide, 180” long, and 48” high. It is powered by a 4-cylinder, 80bhp Austin Mini Cooper S engine. The car was promoted as a 2-seater, but they would have to be two small people! The motor drives the rear wheel through a 4-speed transmission and powers hydraulic pumps driven by the engine. The hydraulically-driven gyroscope is in the front where one’s feet are.
Specifications of the Gyroscope:
1. Flywheel diameter is 17.1”
2. Flywheel weight is 230 lbs.
3. The flywheel must spin at a minimum speed of 2,400 RPM to balance the car, and its normal operational speed is 3,000 RPM. It takes about four minutes to spin the gyro to operational speed. Once the engine is shut off, it takes about two hours for the gyro to stop spinning. Spinning at 3,000 RPM, the gyro has as much energy as a 2,000 lb. car going 30 mph."

"Was the Gyro X Practical?
In theory, a gyroscopically-balanced car sounds great. In reality, it is a very complex system with a great deal of stored energy. If something goes wrong, it could be very dangerous. The 1967 Gyro X was a functional car, although it seems the high-speed stability was questionable. Even now, 50 years later, with more advanced electronics and a better control system, the car remains very complicated. The gyroscope and surrounding control system together weigh about 900 lbs., which includes three hydraulic pumps and 100 ft. of hydraulic tubing. It’s hard to see how this could ever be financially feasible as a mass market car."

Thanks so much for that, Jeff. Let's hope the car receives the attention as it deserves as this has been such a challenging restoration. For some original film footage of the car in movement, click here. Good luck to Jeff and the team of the Lane Motor Museum. The 'American Dream Cars of the 1960s' class boasts another 9 cars, all fantastic on their own: 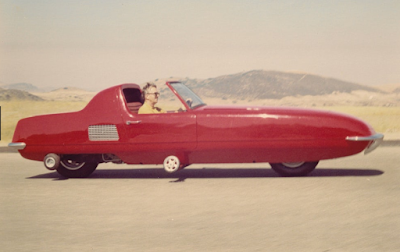 It worked! Gyro X prototype back in its heyday in 1967. Its restoration is a real challenge
Picture courtesy Lane Motor Museum 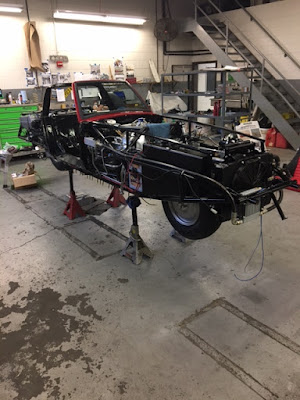 This is how the car looks at the moment, with under two weeks to finish it for Pebble Beach
Picture Jeff Lane 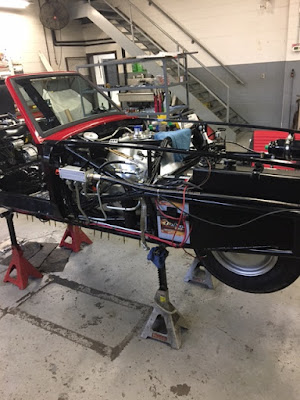 The Gyro X is known for its gyroscope, seen here as refabricated to the original specs by Impianti in Italy. Jeff wrote: "Even now, 50 years later, with more advanced electronics and a better control system, it remains very complicated. If something goes wrong, it could be very dangerous"
Picture Jeff Lane 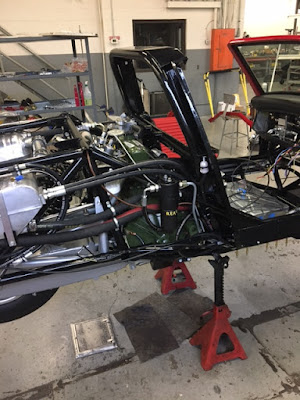 But… what drives the car is a Mini Cooper 'S' engine, placed behind the seats
Picture Jeff Lane 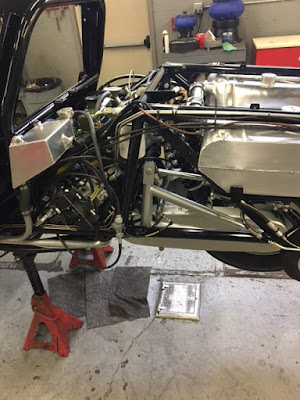 Once the Mini engine is shut off, it takes about two
hours for the gyroscope to stop spinning
Picture Jeff Lane 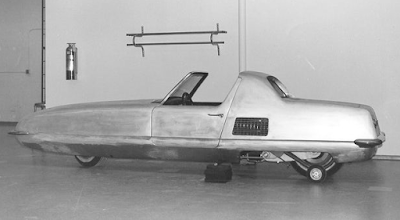 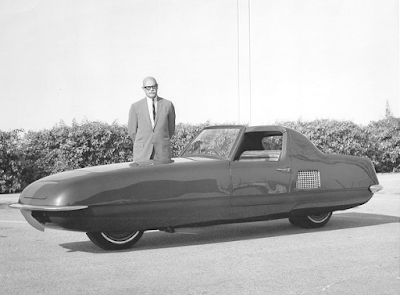 With Alex Tremulis in 1967. He was a former designer of Duesenberg, Ford, Tucker, Cord and Chrysler
Picture courtesy Lane Motor Museum