You guys know I am a sucker for new discoveries. And there are several cars which I'd love to find one day. One of them is 'Odnik': an Irish-built Mini based roadster, raced (and built I'd say) by Jack O'Donoghue in 1961. What's so special about it? Well, I really believe this car was based on a 1958 Mini prototype of which not a single copy is known to survive. You can read more about it here and here.

Now. So far, all traces to the car itself have led to dead ends. But at the end of the year I was contacted by Trevor Ripley, who'd just bought an old Austin Seven 850 dealer pack and found something interesting in it... Trevor wrote:

"Hi Jeroen. I bought an old Austin Seven 850 dealer pack off an ex Longbridge employee. Included with it were these original photos of what you call the DGS firecrest / Special (more about these later-JB). I have just been going through the dealer pack and discovered on a blank page a pencil sketch of a similar car. From my memory I have seen a picture of another soft top Mini derivative a while ago, also registered in Ireland. A similar car to the Donald Healey car (chassis 102). Could this car be connected with Doug Glover? The pencil drawing looks very similar with an ordinary Mini front and rear styling similar to 102. Best regards, Trevor."

Well, well, if that isn't Odnik! Note the cut doors, elongated bonnet, soft top and of course that much-modified rear end. Fact is now that it was not based on an early Van. All this got Trevor exited, and me too! Trevor came back on it: "It would not surprise me at all if Odnik was originally a prototype. BMC would certainly have initially sent a Mini to Lincoln & Nolan as a sample to set up the assembly line. One of the prototypes which were not longer required at Longbridge would make sense." Trevor also got back to the man he bought the dealer pack off: "I have just telephoned the guy I got it all from, Les Gammon, to check if there was anything else he could remember but he has already told me all he knows." So there we go. It only strengthens my thought about Odnik being a 1958 Mini. The question remains: could it survive..? 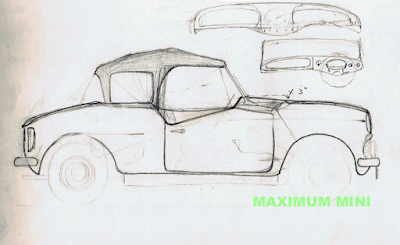 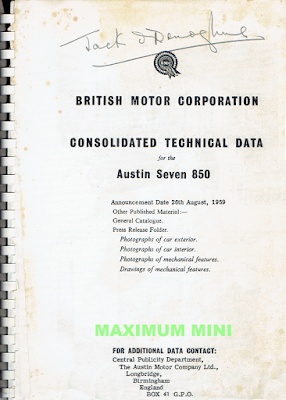 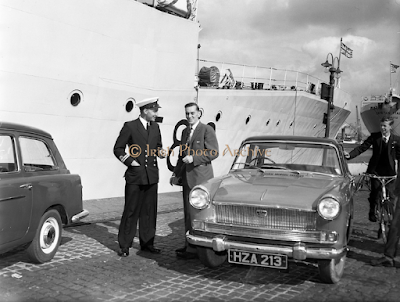 The only picture I can find of Jack O'Donoghue (center) is taken in September 1960
Who knows more about this man, who was PR Officer at Lincoln & Nolan in Dublin?
Picture Irish Photo Archive