How a Lola engineer built himself a MiniSprint

Another great message from John Fischer, who contacted me about an interesting email he received from Peter Comben, about Minis he built in the sixties. This is what Peter wrote:

"I had worked on and modified a few Minis, so was familiar with the car. The original 'MiniSprint' car, displayed here at Brands Hatch with Stirling Moss, was my inspiration to build my own version of this. It was 1966 and Minis and their spares and parts were very sought after and expensive. I found a clean body shell with roof damage and cut a decent roof off another at a scrap yard. Set up on my make-shift jig, I took one and a half inches out of both the mid-body line and the window pillars and one and a quarter inches out of the roof, removing the gutters. Front and rear bulkheads were modified to suit. All window pillars had to be realigned to match up and the whole assembly was done using a thousand pop rivets before taking the shell on a trailer to be welded. Next it was a then case of cleaning and filling all the weld joints, undercoating and top coating."

"The door panels were ground off and the bare frames were reduced in height to match the body. The panels were replaced with aluminium sheet and the window frames modified. The windscreen and all the windows were replaced with Perspex and the bonnet and boot lid were fibreglass. The engine was 1098cc from an Austin 1100 car and was re-bored +40 thou. I chose this engine because it was cheaper than Cooper ‘S’ and it was 'under-square' - its stroke was longer than its bore. This would put the torque curve lower in the rev range. The crankshaft, con-rods and lightened flywheel were cleaned smooth and balanced. I used the BMC 649 full-race camshaft. The cylinder head was skimmed to raise the compression ratio and new guides, larger valves and stronger springs were installed. The carburettor was a twin-choke downdraught Weber. Power came in at around 3000 revs with quite a kick, right up to 7000 revs (occasionally but rarely to 8000). The gearbox final drive ratio was raised to 3.44. Maximum speed through the gears was: first 30mph, second 60 mph, third 90 mph and fourth * mph! The exhaust sounded great, from chugger, chugger on tick-over to sheer howl at high revs. Cooling was with a front radiator in addition to the normal side radiator, but with no fan (sometimes a problem in London traffic)."

"Low front bucket seats were fitted, with no rear seat. A large, flat fuel tank was fitted flush in the boot floor and the rear subframe was covered underneath with aluminium sheet to improve airflow under the car. Later, a chromed side-winder exhaust was fitted. I had been working at Lola Cars for a while, but it was time to move on and sell the car, so I installed an 850cc engine with rally cam (731?) and normal exhaust, and I sprayed on a 'go faster' stripe."

And the Sprint wasn't Peter's only project car. after having finished it he soon started work on a Mini based buggy of his own design. More on that soon. Thanks Peter and John for sharing the story! 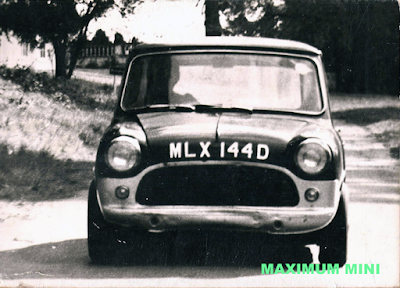 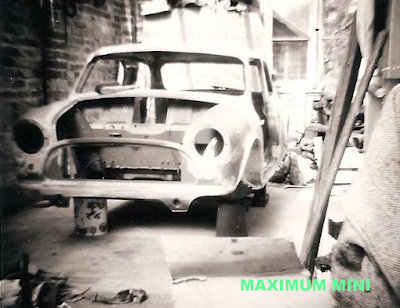 Then the tough job of sectioning the body could start. Not for the faint-hearted!
Picture courtesy Peter Comben

But the result is stunning. A DIY-MiniSprint just after the real thing had been released
Picture courtesy Peter Comben

A great picture to show the comparison with a standard Mini. It's not just a roof chop!
Picture courtesy Peter Comben 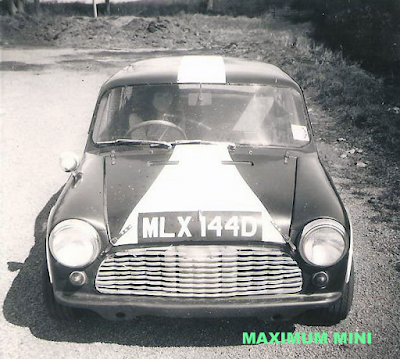 By the time the go-faster stripe was added, the highly tuned 1100 had been replaced by an 850 engine
Picture courtesy Peter Comben 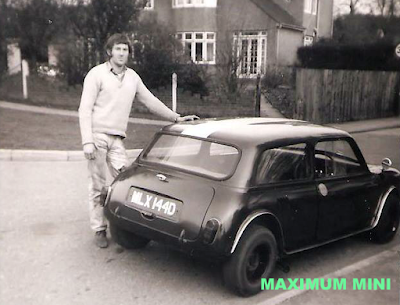 Peter with the car before he sold it. He worked for Lola Cars at the time
Picture courtesy Peter Comben
Geplaatst door Maximum Mini op 13:34

Email ThisBlogThis!Share to TwitterShare to FacebookShare to Pinterest
Labels: MiniSprint