Sabre Sprint owner Ron Palgrave dropped me a line about his car and mentioned, in between the lines, that he had two old photographs, too, taken at Croft in the late 1960s. The first of them is shown below. Ron wrote: "As I mentioned I have two pictures which I took at Croft, our local track here in the North of England. I have retained no information to support them, so they will have little value. But it is better that someone else has copies rather than stuck in my files."

So how about the car? Certainly an early GTM, most probably a Cox. Hang on, it looks to be this car, driven here by one D.E. Boler on Oulton Park in a near miss with an Aston Martin DB4 GT Zagato... Look at the flared rear arches, wide 'reverse rims' and two-tone colour scheme. Who knows more about mister Boler and his Cox? More on Ron's Sabre and his other photo next time. 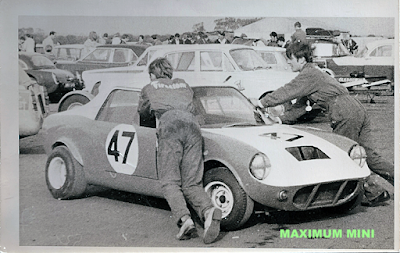 Cox GTM seen at Croft in 1969. It is probably DE Boler's car that was seen at Oulton Park, too?
Picture Ron Palgrave / Maximum Mini archive