Yesterday I posted another Mystery Mini derivative. It wasn't on its own as the picture of the thing showed several other Minis, of which many of you knew more. And so the messages about the orange and blue customized Minis didn't stop coming in. Hey, it was the green car I was after! Colin Baines, who recognized himself in the picture, knew it was owned by the bearded man next to him. He also remembered it used the mechanicals of an Austin 1300 GT.

But it was fellow Dutchman Kees Plugboer who dug deeper and came up with a photograph of the thing, copied from a magazine article about the Mini's 25th anniversary at Donington Park. We see the bearded man once again, ready to hop in. His other half (?) appears to have done so already. We also see a registration number: Q412 NTR. According to the DVLA this belongs to a Tourer of 'Other British Makes'. The registration dates back to July 1984, which means it must have been finished just before the anniversary party which took place  on August 27th, 1984. And the rosette suggests it won a prize, too...

The article showed some more nice Mini based cars, a nice Mini Marcos (Mk3 I think) with added front spoiler and a TiCi in particular. I like the rare hardtop on the latter. Thanks very much Kees! Now, over to the green Special once more. Who is our bearded friend? 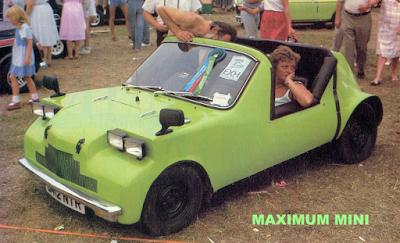 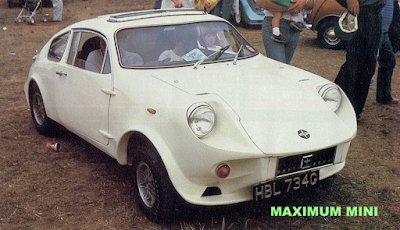 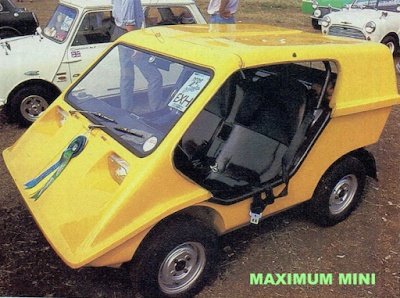 As was this TiCi. This one with a rare hardtop. Like the green Special it seems to have won a prize?
Picture via Kees Plugboer