Swedish Ogle remains a mystery, as its importer

It's been almost five years since I wrote about an Ogle SX1000 in Sweden (click here). And I haven't found out much about it since. The article in Technikens Varld magazine dates back to 1965 and does mention an importer of the Ogle. They were called 'AB Hasselheim & Engelberg' and were based in Stockholm, from where they sold the SX1000 at 15,900 crones back in 1963. I tried to find out a bit more and to my surprise the address stated still housed a garage. I contacted them by e-mail and got an instant but short reply: "Hej. Har tyvärr inga som helst uppgifter om detta". In good English: Hi.
Sorry, no information about this.

But then I got in touch with Martin Andersson. Martin is a Swedish enthusiast, who wrote: "My dad, who was living in the Stockholm area in the early 1960s, confirms that there was indeed one Ogle SX1000 car seen around in the period. And that must have been that particular car, which was scrapped, because I have never heard of any Ogle existing elsewere in Sweden. And I'm quite informed in the Swedish Mini scene. My dad told me that the Ogle he used to see was parked outside the BMC garage where he used to service his Cooper. It was Gold in colour and this should have been between 1963-65. Maybe there was an instant respray or there was more than one Ogle imported?"

He continued: "I have tried to look up the Ogle’s registration. The suffix 'A' confirmes that it was a Stockholm area registration, but the problem is that in 1972 the numbering system was replaced with the modern ”ABC 123” style system. And all numbers from then on where put in a computerized database. To backtrack an old county type registration and possibly find out if it ever were transformed into the new system. You need to contact the respective county register, and pay them 900 Crones (88 Euros) per hour of search."

It may not lead us to something, but Martin had another surprise. More about that next week. 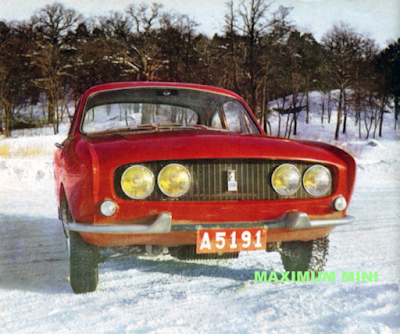