Sabre Sprint owner Ron Palgrave already shared an image of a Cox GTM at Croft circuit in the 1960s (click here), and he has this one, too. As with the Cox, Ron has not much information about the picture other than that it was taken during the Whitsun Trophy in 1969 but, in his own words 'it is better that someone else has copies rather than they are just stuck in my files."

So let's see what we can find. It's a Landar R6 for sure but I'm not sure if it is one we've seen on here before. Hang on, there is this modified Landar as seen on the circuit of Montjuich in Spain, which shares its light nose over a dark body. Could it be the same car before the modifications? But hang on once again, that car was raced in Spain by David Boler while the Cox GTM spotted by Ron appears to be this one, also raced by a mister D.E. Boler. Surely not a coincidence..? 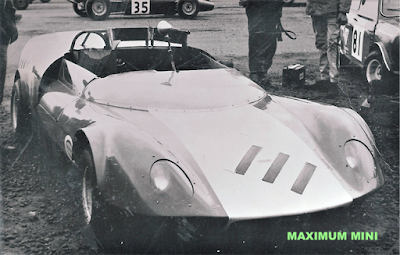 Landar R6 seen at Croft in '69. Was this the same car raced in Spain by D.E. Boler?
Picture Ron Palgrave