It doesn't happen all too often that a message on here produces replies many years after being published, but it certainly goes for the little piece I wrote about Mike Wilsdon and his eclectic collection of cars, back in 2011. Among these not one but two Status Minipowers (or Status Symbols as they were named initially). See the original piece here. I later wrote: "Mike Wilsdon must be one of Britain's best kept secrets, as he manages to create a near Sir David Livingstone-like status of myth here."

That was in late 2011 and many more messages and leads would follow. I still never spoke to the man, though. But more recently Barnaby Holmes got in touch. He is a family friend of Wilsdon and recently visited his barn where many of his cars are stored now or were until recently. Barnaby was also kind enough to take some photographs of the two Statuses that Mike still owns. He wrote: "Hi Jeroen, we spoke some time ago and I'm a family friend of Mike. I've recently been to the barn where he has some of his collection. The vehicles are being moved and ultimately, put up for sale. I thought you might like a couple photos of his Brian Luff Status Symbols! Apologies for the poor quality. Regards, Barnaby."

That is, of course, much appreciated. It's good to see the cars are still about and I wonder what will happen to them in the near future. Earlier sleuthing work proved that the green one was previously owned by Arthur Bills, who got in touch about it in 2014 (click here), while the red one was at around the same time by Stuart Hards, who also contacted me back in 2012 about it (click here). To be continued. 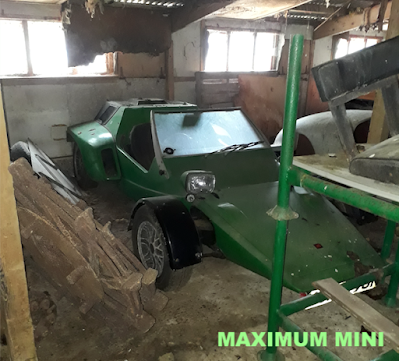 Still owned by the illusive Mike Wilsdon and tucked away in a barn: a Status Minipower
Picture Barnaby Holmes 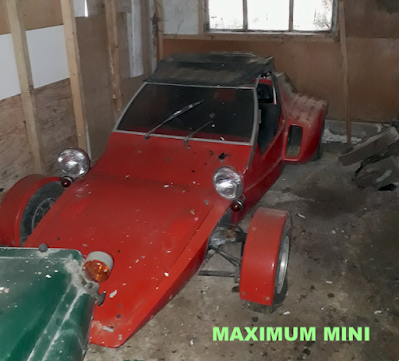 And another... This car was owned by Stuart Hards in the early 1980s and used an 1100 engine
Picture Barnaby Holmes
Geplaatst door Maximum Mini op 13:55