Whatever happened to Lady Di's Mini?

The late Diana, Princess of Wales, is very much in vogue once again, or so my wife and daughters tell me. It made me wonder whatever happened to the convertible Mini she was supposedly given by Prince Charles for her 21st birthday in 1982? You'll be able to find anything on her old Austin Metro, which is on museum display now, but the Mini is completely shrouded in mystery.

The convertible actually was a Daly Runabout built by Daly Cars of Edgware, greater London. Press releases were sent out in force in May 1982 to get the reports printed in time (the birthday took place on July 1). With these releases two black & white pictures were sent along, one of them showing the car with 'Broadfields' plate (the dealer?), while the other one showed only just the actual registration number, which may well have been 'TRF 34X'. That's at least what Daly Car's demonstrator and brochure car also wore. That car, however, was white and wore Weller wheels, while the Princess' car came with Mambas and may well have been a slightly darker hue? Silver grey perhaps?

Remarkably, no other image of Diana and the car are known and I wonder if she actually got it? One white Daly Runabout, which seemed exactly like the one seen in the brochure, was sold in 2016 and said to have been owned previously by cricketeer Duncan Fearnley. But while it also came on Mamba wheels, it wore registration 'MUY 68X'. DVLA doesn't recognize the number 'TRF 34X' anymore. Could it all have been one and the same car after all? Or were they two different cars in the end with the number plates swapped around..? But where is the car then, that was supposedly given to Lady Di..?

UPDATE 1: One reader with better eyes than me pointed out the difference in side stripes and their width. Closer inspection reveals that the striping on the Lady Di car is equally wide but in other and more contrasting colours, difficult to see on the b&w pictures. On the white car it's light blue and darker blue, on the Diana car it seems almost white (top) and black (bottom). See added detail picture below.

UPDATE 2: More to indicate that TRF 34X is another car as Lady Diana's car very possibly wore another registration number after all. DVLA records show that the following numbers may well have been issued to sister cars, all registered as Austin Morrises and with 998 cc engines: 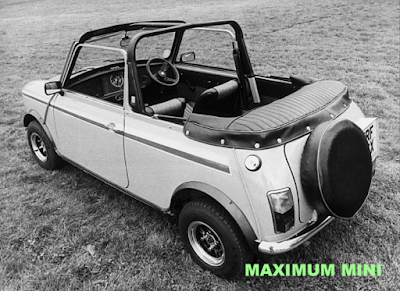 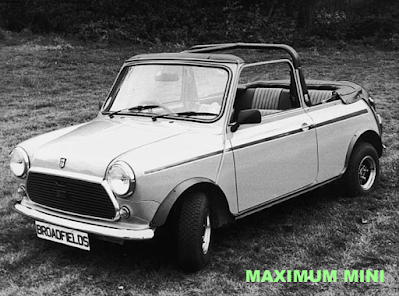 'Broadfields' plate at the front. Was that the dealer? And what colour is this car?
Picture Jeroen Booij archive 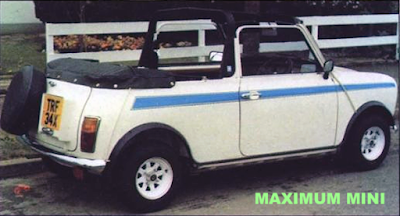 Demonstrator and brochure car may have worn the same number: 'TRF 34X'. But is it the same?
Picture Jeroen Booij archive 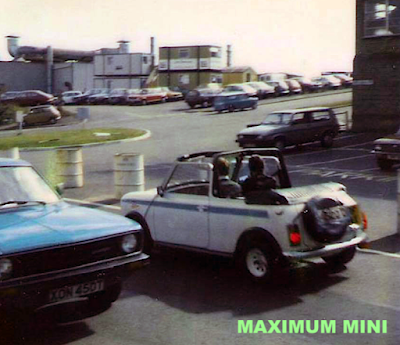 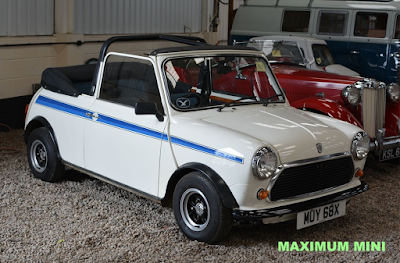 This car was sold in 2016 by Brightwells. Apart from the wheels and the registration number,
it seems totally similar to the brochure car
Picture Jeroen Booij archive 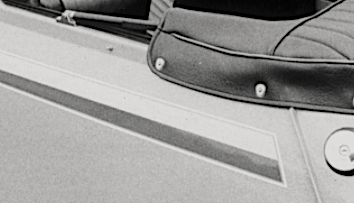 A detail of the side stripe on Princess Diana's car with some added contrast
Picture Jeroen Booij archive
Geplaatst door Maximum Mini op 10:00