Where is the one-off Micron GT?

Are you on an Easter egg hunt this weekend? How about starting a search for the one-off Micron GT Special? One reader asked me about the car recently and I thought it would be well worth asking if anyone happens to know more about the car's whereabouts.

The Micron GT was built in 1967/'68 by brothers Brian and Rex Bray of Leicester Forest. The brothers made a frame from steel tubing and closed it with a plywood floor and fibreglass body with gullwing doors. It used the engine of a wrecked Mini Pick-up at the rear and mated to double wishbone suspension, which was fully adjustable and made to a design of the two brothers themselves. Despite being a standard 850 engine, the Micron supposedly had no difficulty in reaching a 90mph speed when the engine was revved to 6,000rpm. Brian Bray was quoted in Hot Car magazine: “I’m going to do a proper mould eventually and get a few bodies off. The next version will be slightly modified for improvement.” To finance the Micron Mk2 the original car was sold in 1969, never to be seen again. It’s unsure if the planned Mk2 version ever saw the light of day.

Now. I hope you will enjoy Easter. But when you happen to know more about the Micron, do let me know. I'd love to start another search. 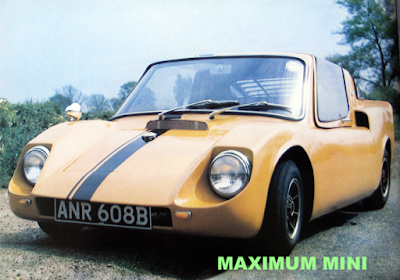