I came across some pictures of a Mini Moke used in a movie recently. This 1965 film was entitled 'Catch Us If You Can' and also known as 'Having a Wild Weekend' in the US (trailer here). The movie was mostly meant to promote a band known as The Dave Clark Five, whose popularity is said to have rivaled that of The Beatles at the time and they were sometimes called the Fab Five.

Anyway: looking at the car I was thinking it may well have been an early attempt to coachbuilt the Moke by Wood & Pickett. The knobbly tyres, wheel covers and steering wheel are similar to the '65 Moke that was used for promotion by W&P and later used extensively in the television series The Prisoner. W&P director Eddie Collins told me some years ago: “I’d done some work for a film company and after having done a car for the actress Hayley Mills it just spread through the showbiz world". That was in '64. I also found that the Dave Clark Five car, registered 'BX 656C' was also used in an episode of The Avengers. Could it survive? 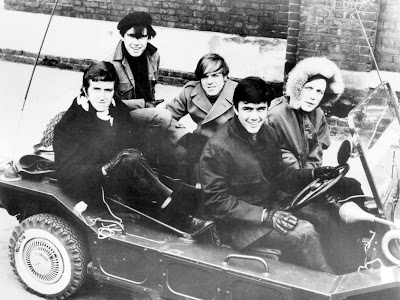 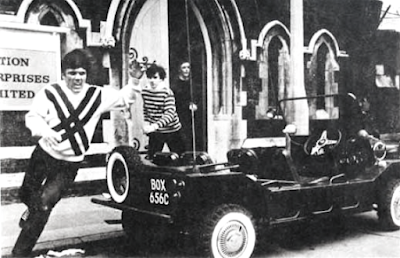 And... action! The car, registered 'BOX 656C' was used in the movie 'Catch us if you can'
Picture Jeroen Booij archive 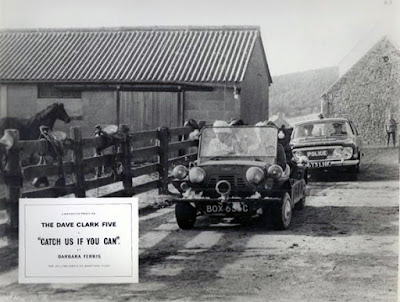 Here in an official promotional picture. The Dave Clark Five rivaled The Beatles at the time
Picture Jeroen Booij archive 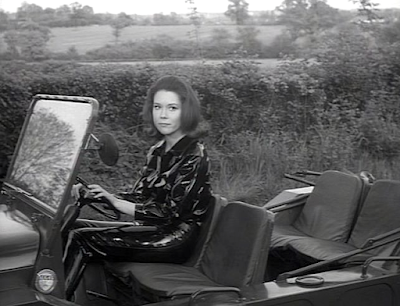 The same car, 'BOX 656C' as seen in The Avengers with Emma Peel behind the wheel
Picture IMCDB.com