This message appeared here over eight years ago, when an anonymous reader replied that the GTM Rossa in question was built for Jackie Oliver to drive in the Mini and Mini derivatives race at the 2009 Silverstone Classic.

To further quote him: "Jackie Oliver ran it in practice but it overheated due to an inadequate intercooler on the supercharger. It was retired before the race. The engine was built to deliver 200bhp but only achieved 158bhp on the dyno. It had a Jack Knight six-speed box. After SC09, the engine and gearbox were removed and replaced with a 1300cc Hayabusa engine (187bhp) and 6 speed sequential box for track days. The final drive is through a Qaife unit. The ensemble delivered astonishing performance and, at Goodwood, the 11000rpm rev limit blew away the sound recording equipment so we had to limit it to 9000rpm. Unfortunately, the driveshafts proved inadequate during fast runs at the SC11 media day. Replacements are being specially built with the objective of enabling the engine to be enhanced by changing the barrels to 1500cc and adding a supercharger which should deliver 400bhp. The car was beautifully restored and has a full roll cage and all the usual race refinements but with the added benefit of a passenger seat and full harness. The car is still road legal and will be used on the road when the work is completed over the winter of 2012/13. At the same time, an electric reverse will be installed."

Although it seems to be not anymore powered by a Mini unit, it's still an interesting car. I found a few pictures of it, supposedly taken recently and I'd still love to see more of it. 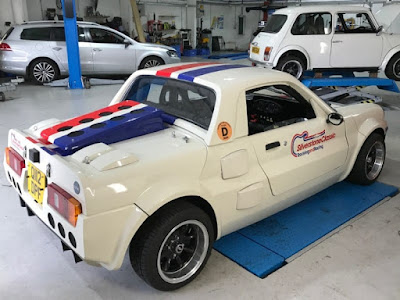 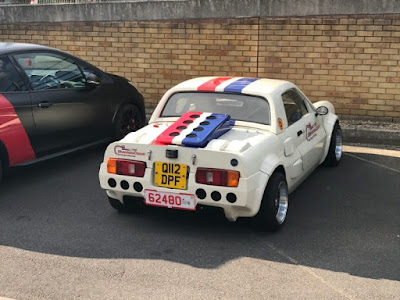 It was had a a Jack Knight six-speed box mated to an engine "built to deliver 200bhp but only achieved 158bhp on the dyno". It supposedly is much more powerful now
Picture powerbaseservices.co.uk