When you come across these pages regularly you may recognize the name of Terry Smith. Terry is a Scotsman who built the Mini based Metron in 1971 when he was 23 years old (see Maximum Mini 2 for the full story - bit more here, too). The thing is: Terry has never stopped building cars ever since the Metron! And the number of projects he is currently working on is impressive. So when he drops me a line it is always about something of interest. Now, for example he has taken up production of what he calls the Unipower Evolution. He wrote:

"Hello Jeroen. As you know I have an original shell and chassis and I am rebuilding that exactly as it was originally built. The body had a fair bit of damage, and I started by restoring the shell. After completion I made a set of moulds in case of any future damage or if any one was looking for a replacement shell for their car. The Unipower used a steel Triumph Spitfire windscreen surround, which is quite difficult to find these days, so I moulded the screen surround with the roof panel in GRP. I have also changed the surround to allow a Laminated or Lexan screen to be bonded in instead of the standard rubber seal."
"When planning the restoration I had a chat with Ernie Unger who conceived the Unipower. He was also a development engineer on the Hillman Imp, with its Coventry Climax based aluminium engine. I asked Ernie if he ever considered using the lighter Imp engine in the Unipower, which would also have provided more interior space? He told me he was a great admirer of the Imp mechanical spec, but had already fully designed the Unipower and did not want to do a complete redesign.
I am therefore building a 'prototype' Evolution Unipower but using a composite monocoque and Imp mechanical parts rather than Mini!"

"The Unipower chassis' rust very badly, and the monocoque gets rid of this problem. I will be making a full set of moulds of the monocoque, and this would be ideal for limited production as there would be no confusion with the original run of 72 or thereby Mini Cooper powered Unipower GTs. I am also combining the rear clip with the main body shell, and engine access will be through a side hinged E-Type rear hatch. I hope all is going well with your Le Mans Mini Marcos, and look forward to keeping in touch as we both progress our projects. Kind regards, Terry."

Despite using no Mini engine, I think that is awesome news! Thank you Terry. And he has more news to come up with soon. Stay tuned. 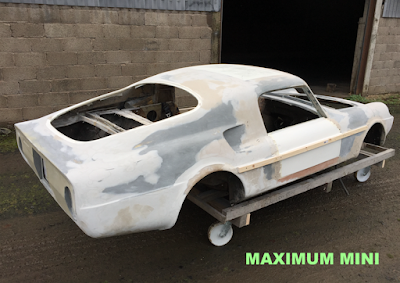 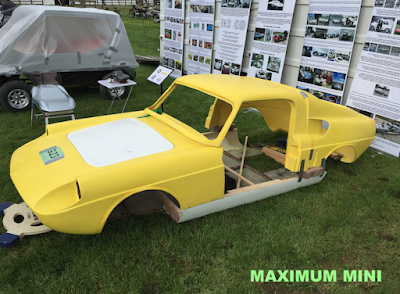 Work started from an original but damaged body shell that was restored and of which moulds were made. Here at the Thirlestane Castle Show. Note mouled-in windscreen surround
Picture Terry Smith