What was the Alda Jem?

An interesting message came from Dave Transom who lives in Australia. You may have heard of the Aussie-built Taylorspeed Mini Jem, but Dave comes up with a possible new variant: the Alda Jem. He wrote:

"Hi Jeroen, I was looking at Maximum Mini and noticed you posted about the moulds for the Mini Jem going up for sale in Sydney. In the 1970s I bought a car in Sydney which was badged Alda Jem. The badge was round, on the front of the car, there was some kind of graphic as well, but I don’t recall what it was. This was a Mini Jem, and I am guessing that it was locally produced. I don’t have any pictures, it was a long time ago, maybe 1972-3? But I definitely remember the Alda Jem badge, and I seem to recall being told by the person I got it from that it was made in Adelaide. I did see another one a few years later, but never got to speak to the owner. So it wasn’t just a Taylorspeed with a one off badge on it. Is it possible that these were someone’s attempt to go into production or a badge from a dealer?"

"When I got it the car was minus its powerplant. I had an 850 which I put in and was amazed by the performance, I think it ended up with a 1275, even better. I eventually sold it to a friend, who took it back to his hometown in the country. His older brother told him he had wasted his money, and persuaded him to strip it. Funny thing, all the adjustable racing suspension, wheels and good engine and box ended up in the brother’s car. I did see the steering wheel on my friend’s car. Last I heard the body was sitting out in the weather on their farm."

"I was wondering if you knew anything about them? Recently I found this ad with one for sale. Mine was missing the powerplant and rear window, but did have fully adjustable suspension and mag wheels. Perhaps this was the car I bought, I don’t know… It is possible it was a one-off, and the advertised car, my car, and the one I later saw in Sydney (although a different colour) are all the same. Have you ever heard of this variant? Cheers, Dave Transom."

I haven't! And couldn't find anything on them in the files either. Perhaps one of my readers will be able to shed a light on this one? Some of the pictures below have been posted on the excellent 'Aussie Independents and Fibreglass Car Community Group'. 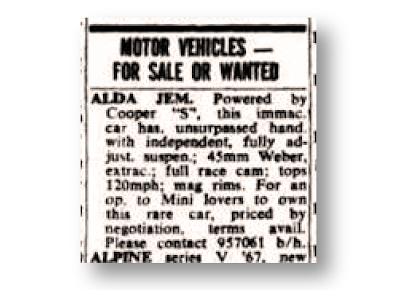 The ad from The Canberra Times, December 1970
Picture via Dave Transom 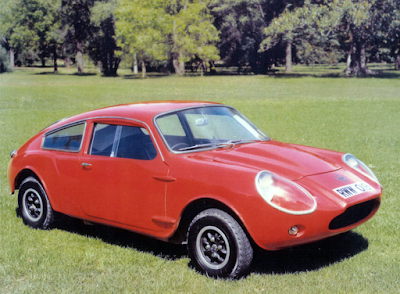 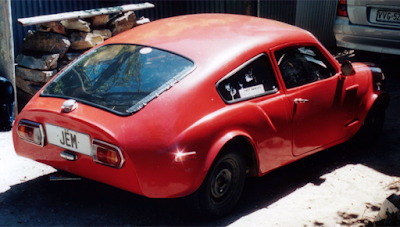 And I think this is another Taylorspeed car, or is it?
Picture Tony Shaw / AIFCCG 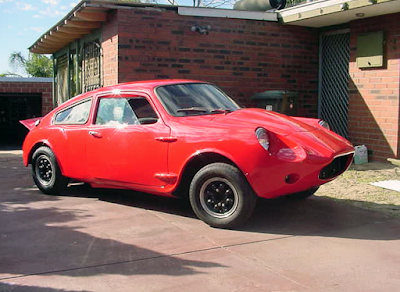 Another Jem in Australia. A Taylorspeed? Or a later one? Or an Alda Jem?
Picture Tony Shaw / AIFCCG 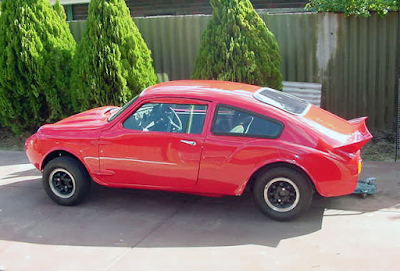 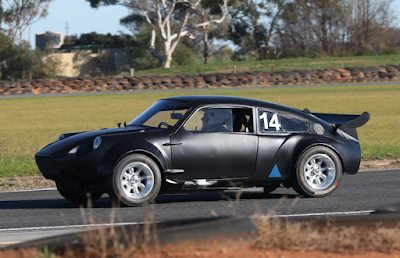