Now here's one Mystery Mini Derivative that has been haunting me for a long time. So far, all we know is that the car was seen (and photographed) in St Ives in Cornwall somewhere in early 1983 by a man named Maurice Equity Leng. From the registration '169 EEA' we can learn that the base vehicle was a 1961 Mini Van with 1100 power. But no badges could be found on it. The windscreen is larger and more raked than that of a standard Mini and the body may well have been sectioned, too? And then there's the low nose and widened arches. In fibreglass? We do not even know that. Who does?

UPDATE 4 October 2019: Various readers recognize the bonnet of a Triumph Spitfire.
Alan Brown wrote: "Hi Jeroen. Looking at it, it seems to be a Triumph Spitfire / Mini mongrel. Apart from the addition of the flared arches I think the front subframe would have been extended forward to pick up the Spitfires flip front hinges, without taking measurements of each cars widths at the A panels of each I cannot tell if the front of either part would have been adjusted to suit, from the picture it looks as if the mini has no changes. Maybe where the front arches have been fitted aided the change to suit the shape transition."
He later added: "After a bit of investigation I found that the Mk 3 Spitfire was only 31mm wider than the Mk1 Mini van so the integration would have been fairly easy" See the photoshopped image he came up with below.
Ian Shearer wrote: "Hi Jeroen, I've just made contact with a friend who has had a shop on the harbour side, near 'The Sloop' since the early 80's and may well be able to shed some light on the car, fingers crossed." 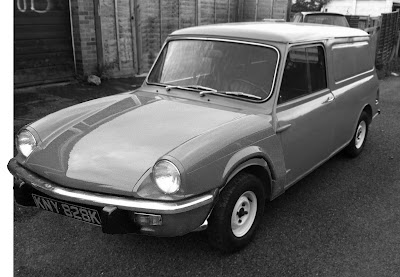 UPDATE: And this is what Alan Brown came up with