What exactly is this coachbuilt Cooper?

An interesting coachbuilt Mini has turned up in Germany. Said to have been delivered new in Barcelona in 1968, this Mk2 car is an early Authi-built Spanish Mini. From the advertisement: "This Spanish-built Mini Cooper is one of only two believed completed with faux 'cane furniture' side trim, the other being in a museum in Barcelona. The car had been disassembled prior to its acquisition by the owner and is now partially restored and in an excellent state of presentation. Accompanying documentation consists of a French Carte Grise and sundry invoices from Morisse Nayrat and British Car Centre for works carried out and parts supplied."

That does look like a nice car indeed with some interior touches unseen to me before. How about the leather-clad lids on the door pockets? It does also raise some questions though. Is the other car mentioned perhaps this Mk1, found in Barcelona a few years ago? Could the wicker work be the work of Taka-Hira of France also? What's the Verdun Automobiles decal doing on the back? And why is it advertised as only 'partially restored'? See the ad here.

UPDATE 28 October: Francisco Carrión, who found out all about the Barcelona car, writes: "There isn't any other at any museum in Barcelona, the other one in Spain with cannage is located in Madrid, is black, and is an original British Cooper car. This white car seems a normal Mini Authi 1275 C (not cooper etc) with cannage of unknown origin..." 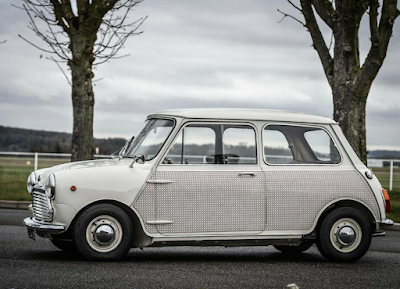 Mk2 Cooper is built by Authi in Spain. But who carried out the conversion?
Picture Mobile.de 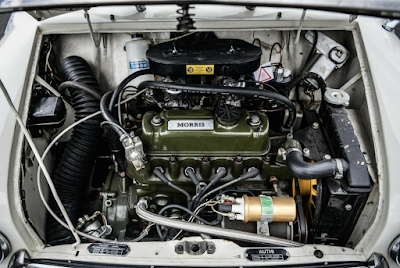 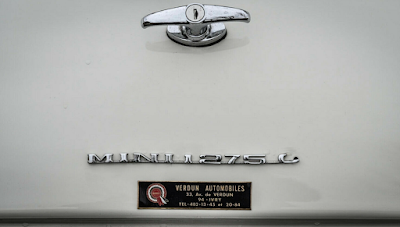 Mini 1275 C was the first Spanish-built Cooper. Was it sold by Verdun Automobiles?
Picture Mobile.de 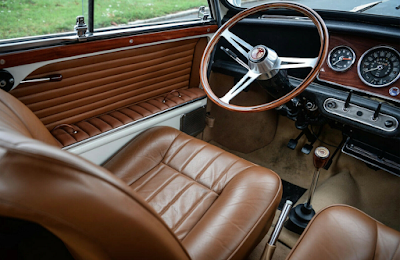 That's a lovely interior. Moca leather and beige carpeting and subtle use of wood
Picture Mobile.de 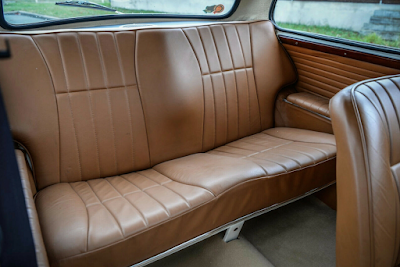 The same goes for the back seat. Also note pocket lids and rear wiper
Picture Mobile.de