Reader Graham Nevil has surprised me before with some great Landar memories, he managed to dig out some more, writing:

"Hi Jerome, Greetings to yourself and time for some more Landar pictures! These probably are the last of my stock of new images that I’ve recently scanned in from slides."

"You will already be acquainted with my father’s old R6 (the last one built ) from previous mails but this is such a nice shot taken at Silverstone in ’73. Another shows its rather wonderful engine which was the final state of tune, Arden 8-port crossflow head with fuel injection, powerful and quite exotic for the day. We previously looked at the possibility that our car is now the Maruyamas R6 but a few differences put me off the idea. I have now noticed that, on what must be earlier pictures of our R6 the roll over loop is only for the driver but this picture, which must be later, it’s now full width, as is the Maruyama car. Also early pictures have ours with a chrome rear view mirror later replaced by a darker one, again matching the Maruyama car. A bit more evidence for a conclusive match?"

"The other R6 picture is of a car that has previously been featured on Maximum Mini and since it carries the number 81 confirms it’s Donnington location. Not sure who the driver is. Interestingly this also has the full length roll bar and in common with the Maruyama car, no headlights and a lower position for the oil cooler on the passenger side."

"Finally a rear view of Frank Aston’s blue R7 at a local sprint, a car which has attracted some inaccurate identifications in the past. Note suicidal positioning of marshals, don’t think that bit of chicken wire will give much protection ! When it was unearthed in that German lockup it was still wearing a vestige of blue paint which implies it carried that colour its entire life even though it appeared to have been given different detailing post Aston ownership with the Hardt brothers. It also seems the roll bar is now different to how it was with Frank and the brothers, what is it with roll bars?"

"Many thanks for allowing a justification for my nostalgic trip down memory lane and best wishes for the Marcos restoration. Graham Nevil"

Thank you Graham! See Grahams earlier messages with pictures of his dad's old Landar (here) and even 8mm film footage shot when he was 16 years old (here). 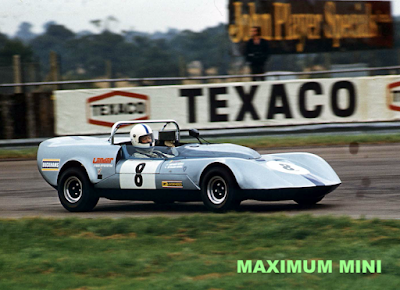 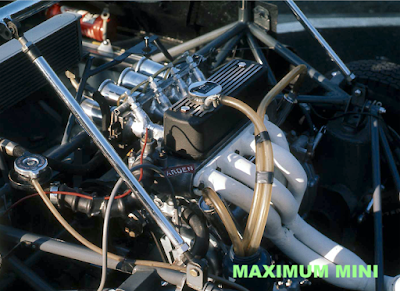 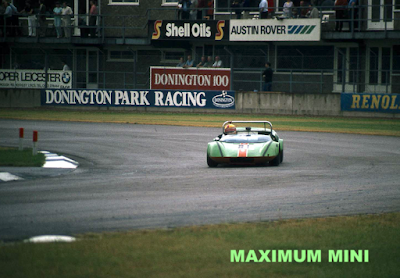 And another Landar R6 as seen by Graham at the time, this one at Donington
Picture courtesy Graham Nevil 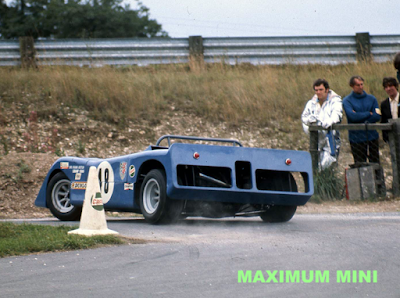 Last but not least Frank Aston’s blue R7 at a local sprint. This car was found in Germany in 2015 with the blue paint still visible on its body (full story here)
Picture courtesy Graham Nevil