This is just a lovely picture from the files taken during the BRSCC races at Brands Hatch on June 2nd, 1968. The first car that may catch the eye is the Cox GTM number 101 of Howard Heerey, but there's more. I like the number 108, which is a car named Timeire and built by Tim Conroy and his dad Patrick 'Pop' Conroy. I have it in the files as being driven by a man named Rob Mason here, but the programme mentions a John Cannadine. Who knows? You can just see the car's wide JA Pearce wheels. Timeire unfortunately does not exist anymore since the car was written off and scrapped at 1974, or so Conroy's son Martin told me.

The entry list also mentions Piers Forester in the same race, driving a Unipower GT under number 102 and we can just see a corner of this car with its left hand headlight on the far left. Could the car behind Heerey's GTM also be something Mini based? Or is that one of the two Diva GT's entered? Or the Elan? Note that Wilf Ashman was racing there also in a Walker GTS plus one Mini Marcos with a Derek Bowley behind the wheel. I would have loved to see them in action all together. 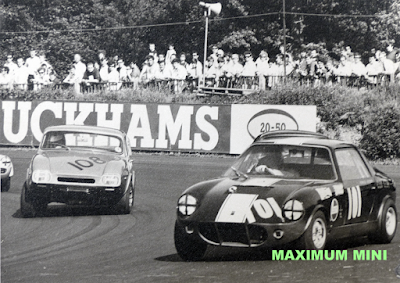 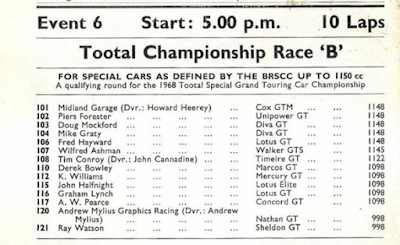