This message about Ogles in the US was posted here some 9 years ago and in the meantime I've learned a bit more about Ogle SX1000s that made it to America. As a matter of fact a lot of information about David Ogle's exporting plans and some specific US cars has come to the light recently. So let's kick off with one car that's still in the hands of the son of the man who was appointed as an Ogle distributor, Anthony Thompson. This is what he wrote to me:

"Hi. I love your website as I never knew so many derivatives of the Mini existed! I have an Ogle Mini Cooper that needs restoring. I inherited it from my father who was an Ogle distributor in South Eastern U.S. in the mid-60s. I don't think he ever distributed any due to Sir David's demise and so the car had sat around a while."

"My father, H.D. Thompson, collected and sold cars as a hobby while working and living in Jackson, Tennessee, USA. In 1961/1962 he picked me up at my university and we drove to the Sebring 12-hour event. Along the drive he informed me he had become the dealer for Ogle for South Eastern or maybe Eastern part of the USA."

"I had a cute experience with the car while at a pre-race event. A few of the drivers decided to return to the course for early evening practice from the gathering we were at. I recommended to my father that we too exit and follow them back and he said "Why don't you drive." which was the first I had been behind the wheel. The drivers got to going "quickly" so I was hustling to keep up resulting in a four wheel drift around a curve and when I hit the gas to drive out of the curve, off into an orange grove we went with me working hard to bring the car to a stop between the rows! Looking at my Father laughing in the passenger's seat I angrily said "You could have told me it was not rear wheel drive!" Couple of followers helped us get it out of the sand and we all had a great time at my expense for 24 hours. Just taught me to always inspect your equipment before you go motoring!"

"A number of years later my father fell significantly ill in Tennessee and I decided to transport the stored and non running Ogle to Texas to get it back into condition as hopefully an uplift to him. Sorry to say he passed soon there after and I lost interest in restoration but have keep the car. In all of the information he retained that I have (i.e. exchanges with Ogle, etc.) I can not determine what the number of the car is. I am also very desirous of restoring the car or selling it to an appreciative person to do so. The only thing I do not have with the car are the seats as I took them out and delivered to a person to redo and they were lost when his business burned down! Combined with other commitments that has stopped my start at restoring. I used ether in the carbs to start the engine about 8 years ago, so it's not seized up but the fuel pump has likely long gone."

That's some great news, with more to follow soon. 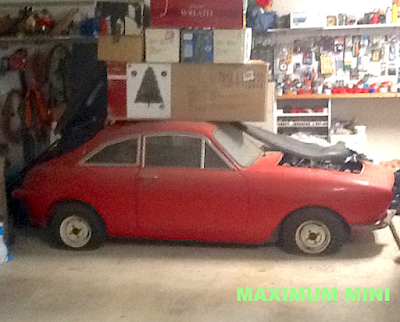 This Ogle SX1000 has been in the same family since 1962. Its complete apart from its seats
Picture courtesy Anthony Thompson 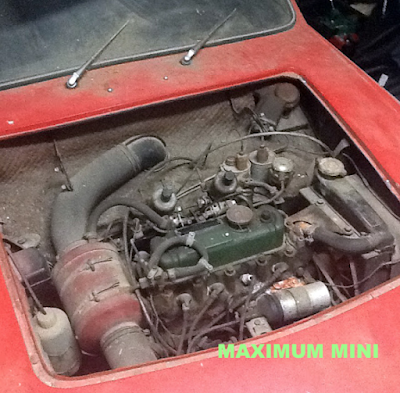 Engine is not seized and ran some eight years ago for the last time. Chassis number is unknown
Picture courtesy Anthony Thompson