One comforting thought may be that, while the whole corona crisis drama continues to unfold, I will continue to bother you with my articles, here at Maximum Mini. As always, comments are appreciated - I'm also just doing this on my own from an isolated converted garage after all.

So how about this car? According to Craig Powers, who posted the picture, this was the second racing car built by the Reverend Barry Whitehead and known as the Reverend Barry's Special number 2, or RBS2. Whitehead was known as 'The Racing Reverend' or 'The Flying Vicar' from Standish, who spent more than 40 years working in the Church of England. It was his passion for motor racing and building his own cars that gave him the name though. He passed away in 2017 at the age of 86.

I found an obituary, written by his daughter Eve, from which I quote here: "He read Alan Staniforth’s book, High Speed, Low Cost, and went on to build 8 of his RBS cars, which he hillclimbed and sprinted. The first was a Mini-based thing, front engine, then numbers 2-8 were single seaters. Initially they were to be numbered MBS1 and so on, for 'Mini Based Special', until someone pointed out that 'Mad Barry's Special' might be a better fit. The name was therefore hurriedly changed to RBS, for 'Reverend Barry's Special', and so it remained. We all grew up, accompanying him to race meetings and we all took it for granted that “our father builds and drives racing cars”. It was only when I started to compete and work with him in the garage, that I realized the staggering level of engineering ability which was actually involved in building a car from an empty garage floor, to one which worked, was competitive, and in my hands, had an affinity for the Armco!"

The late Alan Staniforth, who's Terrapins were an inspiration to the Reverend, once added to that: “The flying vicar was creator and conductor of one of the fastest and perhaps ugliest 1100cc hillclimb cars of recent years. It should be recorded that the Reverend Whitehead’s work on his car back at the vicarage changed it from being so unstable it once spun simply because he was changing from 2nd to 3rd on the straight, into a class winner. An amateur’s mega-leap by anyone’s standards." 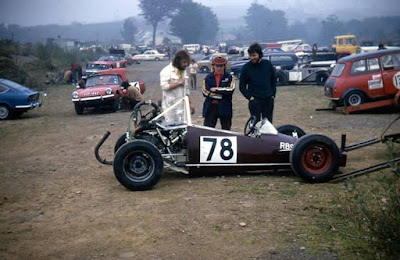 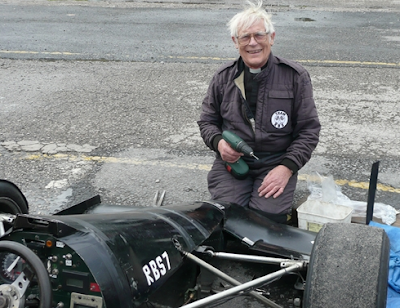 'The Racing Reverend' Barry Whitehead with one of his later cars. He competed for over 45 years
Picture Longton & District Motor Club