Some time ago I asked for more information about a shortened and coachbuilt Mini, probably from Switzerland and probably of 1971 vintage (click here). I received a reply from reader Jotage who wrote: "I think that it's the Mini modified by Schwarzenbach, that appeared in the book 'Les Véhicules Hors Série' by Jacques Borgé and Nicolas Viasnoff."

And so when I found a copy of said book on Ebay in France, I ordered it. There it was. And Jotage was right, too. Although the information on the Mini is somewhat limited, the book is a fascinating read. The caption (in French) translates: 'The Swiss coachbuilder Ernst Schwarzenbach of Thalwil created the Supermini. The car was shortened from 3.05 to 2.43 metres. As a revenge the price has doubled.'

When I dropped the name of Ernst Schwarzenbach in Google search I only found information about a Swiss multi millionaire named Urs Ernst Schwarzenbach who is said to own over £300m of property in the UK and Australia, a palace in Morocco, the Grand Hotel in Zürich and his own polo team with 600 horses while he married a former Miss Australia. It seems he may well fit the bill! Nothing about a coachbuilding company, although being born in 1948 in Thalwil it could be him, really. Who knows?
UPDATE 9 January 2023: The car survives. Click here. 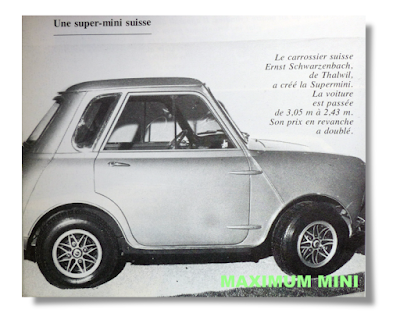