Phil Newsome sent in a picture of a Unipower GT, unseen before to me, through our mutual friend Guy Loveridge. And it's an unusual photo of the car in the sandbags on the side of a racing track in Macau. What happened there? According to Phil the car was crashed in the Sports & GT class race during the 1969 Macau Grand Prix. Next, it was just left there whilst the main GP went on! That is the winner of the GP race seen here flying past the crashed Unipower GT - Kevin Bartlett in an Alfa-Romeo V8 powered Mildren single seater.

I'm not totally sure of the car's racing number. It looks it may well have been number 50 on the picture and that would be confirmed by the hand written entry list that Phil sent over, too. Two entrants are mentioned on that: Mr. William and S.Y. Tam. Who drove it? I found out that it must have been Charles Ching, a very successful barrister from Hong Kong who was educated in Oxford. There is another photograph of Ching's car taken at the '69 Macau GP, from the Imagens Daluz archives. It seems the car is darker in colour, though, but that must have been the light? It was entered under number 27 that year. Who knows more about it? And could it survive? It may even have been turned into this creature..? 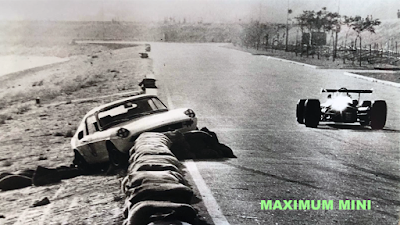 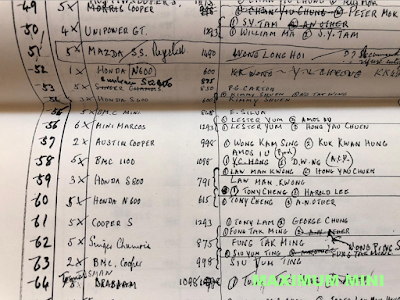 Hand written entry list has the car as being entered by Mr. William and S.Y. Tam
Picture Philip Newsome archives