Biota returns to Harewood - and meets an old friend

Biota owner and Maximum Mini fan of the first hour Tim Harber was in for a surprise last weekend at Harewood. He wrote:
"I wanted to go to Harewood two weeks after Prescott, which was my ultimate goal after 10 weeks of changing power unit and gear change etc etc. (Didn’t fancy hitting a bank with the sheet of aluminium with a bit of padding as a seat and a lap seat belt so we fitted an old race seat and harness). At Prescott I'd not been allowed to run competitively as the Biota doesn’t have a current spec roll cage – they chose to use some stricter rules so I just got to do a 'fun run' - so not timed and not supposed to go fast! They even wouldn’t let me wear my helmet as it might make me keen to go too fast!"
"Harewood was where Chris Seaman won the 1972 BARC Hillclimb championship in the 'works' Biota. I e-mailed Harewood to transfer my entry to my circuit racer as I imagined they wouldn’t let me run the Biota and it got sent to their technical dude. He replied saying I could run! Even better – it was Chris Seaman himself who is the Technical one even now!"
"I got there late Friday night for nice sunset pics and did my runs the next day (not quick as it’s got a standard 1275 with a long (3.1) diff, but happy enough to get there and take part. Got to meet Chris and chat and take pictures (he was the hairy one in the original pics). So, the scene is now set for next year to get a beefy power unit with an LSD to take me nearer the front of the class. I was last this year in the sports car class so all to go for. I did 78 seconds up the hill whereas I had done 71 seconds in my 1965 blue racer before so I was really happy with the handling considering it’s on its original rear (motorbike derived) shocks and springs. Onwards to final victory!"
"I have been emailed some other Biota owners to encourage them to go next year with as many others as can be dragged there. If we manage a picture with 3, it will be a world-first! All good fun. Tim"
Now isn't that a lovely message! Thanks again very much Tim and let's see who else will make it to Harewood in the next year. 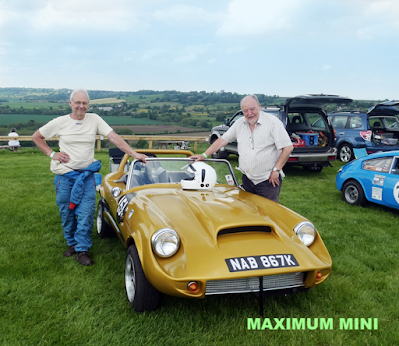 Tim Harber (left) with Chris Seaman, who won at Harewood in 1972 in a Biota
Picture courtesy Tim Harber 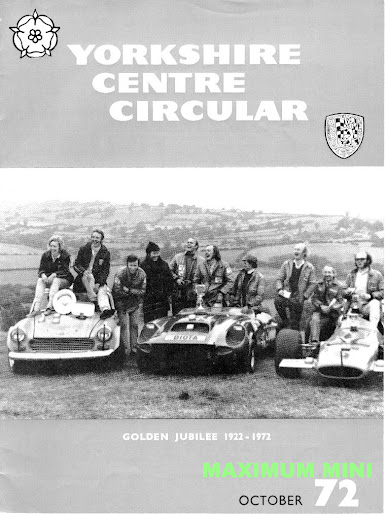 There's the winning car in the centre, Chris Seaman with long hair in it
Picture courtesy Tim Harber 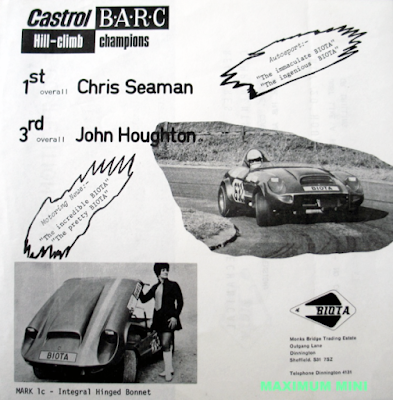 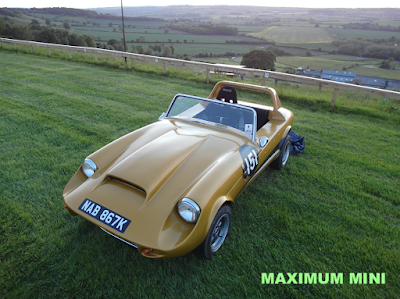 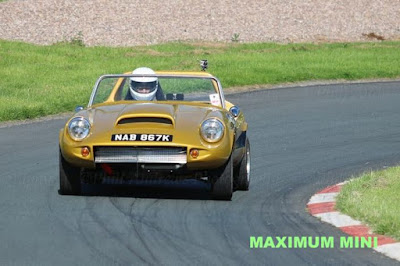 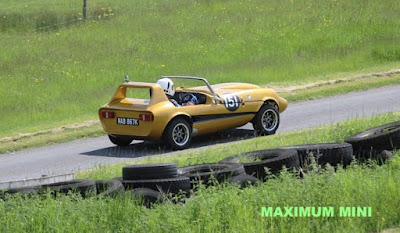 He made it in 78 seconds up the hill with some room for improvement
Picture Phill Andrews
Geplaatst door Maximum Mini op 09:26