Queen Elizabeth has died and the nation is in grief. You shall be missed by many Majesty.

Not quite the kind of posting for Maximum Mini you'd think, but amazingly the late-Queen did have a link to a Mini variant. She appeared in a number of paparazzi pictures taken 60 years ago at Windsor in the summer of 1962 with... a Mini Beach Car.

From a newspaper clipping: "The Queen stands beside the most unusual of her stable of royal cars - a tiny beach Mini-car with cut-away sides and basket seats. Ideal for a sunny day in Windsor Great Park. The copper-coloured Mini is one of only three experimental cars built by the British Motor Corporation and has been lent to the Royal Family. The Queen, a knowledgable motorist, doubtless enjoys travelling in this unconventional little vehicle as much as she does in her Rolls."

The Beach Car was used on a few royal occasions, among them a state visit to Amsterdam in May 1965, when the car was shipped over to The Netherlands and driven by Princess Margaret and Lord Snowdon in Amsterdam. It was never owned by the Royal family though, as they had it on loan from BMC. In 1968 the car was sold and it remains in the hands of the man who then became its lucky owner. 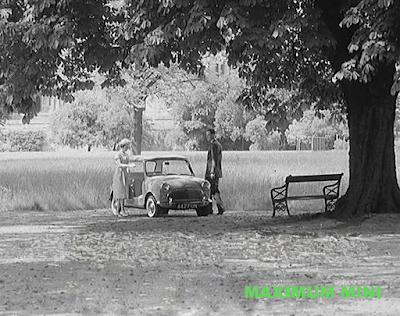 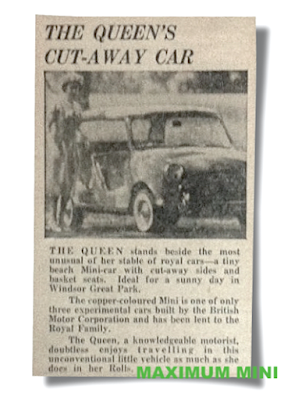 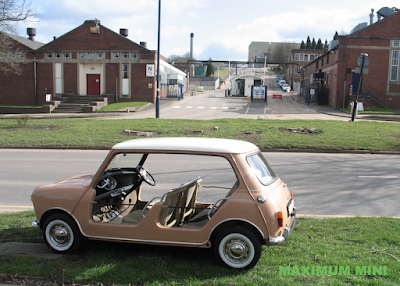 The very same Mini Beach Car, photographed in 2012 in front of the main gate of the old BMC factory in Longbridge where it was built. The factory is now gone as is the Queen, but the car remains
Picture Jeroen Booij
Geplaatst door Maximum Mini op 08:59