Several times I have come across this chic little burgundy Ogle SX1000 and the first time when I did so it was owned by Geoffrey Hunter. Geoff liked restoring cars and he'd done just that with '889 RJH'. But when I visited him on a summer day years ago he told me he owned another SX1000 since the mid-sixties that was bound for complete restoration. In fact, the body of that car can be seen lying in his garden next to '889 RJH'. Geoff was thinking of selling the  finished car to fund his project SX. And so he did. It was supposedly sold to the son of once-Aston Martin owner Victor Gauntlett, but I saw it later when walking through one of London's mews. I came back the next morning to find it was for sale there, again, now with classic car dealer Graeme Hunt, but that is the last time I came across the car. Where is it now? 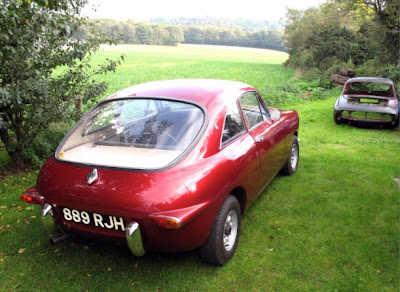 An Ogle SX1000 plus the body of another in the English country side
Picture: Jeroen Booij