Evidence of a planned facelift for the mighty Nimrod was posted on the webpages of Nimrod designer Mike Jupp (click!) recently by an ex-Nimrod owner who photographed the prototype back in the 1980s. He writes: "I have just found a few photos tucked away in a box I had thought were lost. This is the Nimrod facelift that never saw the light of day. The photos were taken in Wiltshire in the mid to late 80s (...) The body is now monocoque instead of the old GRP clad around a space frame. The floorpan is a GRP copy from a Mini shell, from what I remember this would have made for a straight swap over of parts style of build. The rear subframe would still be ditched in favour of swinging arms and coil over shocks as per the ‘original’. As you can see the bonnet is much larger allowing easier access to the points and other components that previously were a pain to get at. In picture 4 (number 3 here) you can see a section of the floorpan mould (grey). The monocoque structure has allowed the floor to be dropped a fair bit so the seat could now be raised for a more comfortable driving position (the seats on my car were bolted to the floor with no adjustment but then I am 6’6”). The rear window moulding is also a little taller adding a bit of headroom when the roof is on."

Funnily, designer Jupp who still owns the Nimrod chassis number 1, never knew about the planned facelift. He replied: "Blimey!! Thanks so much for posting those photos! I was living in the USA during the 80s and knew nothing about this." Exactly how many Nimrods were built remains somewhat uncertain as the production was taken over at least twice. According to Peter Filby "Only five kits were sold before the project folded within months. The moulds ended up at Nova in 1979, which briefly offered the car again. Then Nigel Talbott of the Talbott Alternative Car Company (TACCO) revived the Nimrod in 1981 (...) Few were sold and it just faded away in the mid-1980s." As I have a brochure from TACCO depicting the car in its original guise it seems likely that this facelift was yet another attempt to give the Nimrod a new lease of life... 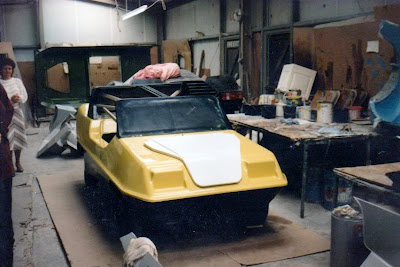 Longer bonnet was meant to give easier access to the Mini engine
Picture courtesy garyh at www.webnet2000.cc/mikejupp 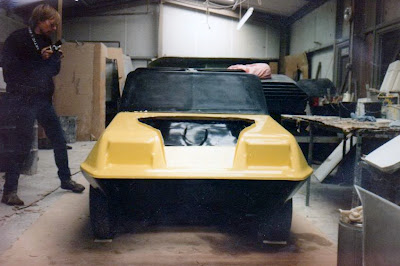 But the major change lay into the monocoque body structure
Picture courtesy garyh at www.webnet2000.cc/mikejupp 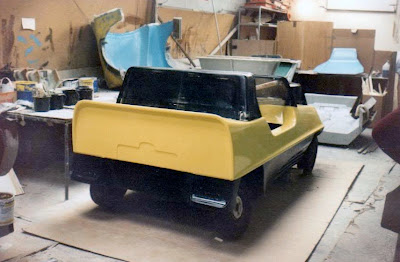 The grey part in front of car is a section of the floorpan mould
Picture courtesy garyh at www.webnet2000.cc/mikejupp