Remember this one? Well, the whereabouts of the amazing MoBi-One remain unknown, but the good news is that the car's builder, Morris Bishop, got in touch with me now. He writes:
"Hi Jeroen. My name is Morris Bishop, the designer and builder of MoBi-One, which was originally built to win the Flather Star trophy which was presented by the BTRDA (British Trial & Rally Drivers Association) to the winner of a series of "Autotests" (High Speed Manoeuvrability against the clock) held all over the UK. In 1969 I was fortunate to get a Cooper S engine from Alec Issigonis (the designer of the Mini) and I then converted this to run on propane, mainly because I was a manufacturer of gas calibration equipment used mainly for industrial vehicles, taxi’s and the like. In 1970 I won the Flather Star and in 1975 sold the vehicle to someone who used it for autocross. He then sold it to the current owner, as far as I know, Mike Wilsdon (JB: another chap I'd love to speak to, see here). Some time in the 1980’s He contacted me to say that he had remade the double rack which was an important part of the four wheel steering system, and would I help him with the re-assembly, to which I agreed. Unfortunately he had purchased a right hand drive rack instead of a left hand drive version for part of the double rack assembly, and thus, when re assembled, MoBi One became CRAB steering instead of complimentary steering – which made it totally useless! And that is the last I thing that I know about the car. I have photos and a scrap book devoted to MoBi-One, if you would like anything from this I could email it to you in about two weeks time as at present we are in the UK, and the book is in Spain. If ever you do find MoBi-One, it would not be impossible to correct the error that MW has made! Regards, Morris." 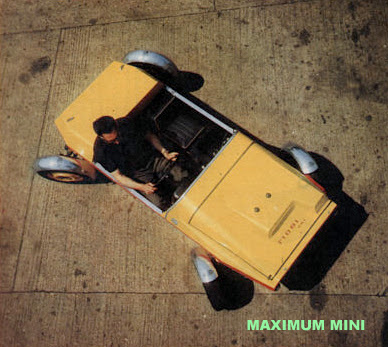