You may remember this post about Innocenti Mini Mare beach cars. I always assumed just three were built by Carrozzeria ORO in the early 1970s after Ferdinando Innocenti asked them to do so. However, there is at least one more as I just found out after celebrated photographer John Stanmeyer got in touch. John wrote: "Hello Jeroen. Stumbled across your blog while doing research on a car I have. The car in question is an early 1970's Mini Mare Innocenti. The car has been in my family for nearly 40 years. When I was a child between the years 1972-1976 we lived in Nassau, Bahamas. My father bought the Mini Mare from an Italian fellow. When we returned Stateside in 1976 we brought the Mini to America. In 1978 I restored the car but in the last few decades it has been garage kept and not driven. Today it rests in my barn, all original, though needing restoration once again. On a related note regarding existing Mini Mare Innocenti's... I lived a number of years in northern Italy. One weekend I was in Portofino along the coast and in the driveway of home overlooking the ocean was a Mini Mare Innocenti. This was back in about 1985. Needless to say I was surprised and thrilled as I'd never seen another Mini Mare  before. No idea if that one still exists but thought to mention. All My Best, John." In fact his message triggers me to find out more about the car in Portofino, too. Could it have been one of the other three cars? Or was it a fifth? Who knows more about it? Or about John's car before it got over to Nassau? Italians, come in! 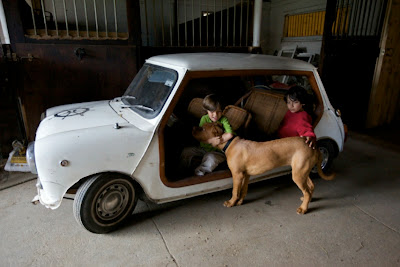