From six-wheelers over to three-wheelers, as I am still looking for an ABC Tricar to photograph (see here). Meanwhile, however, I am learning more and more about these Mini based three-wheelers thanks to Trevor Powell who got in touch after having read my call for a Tricar. As a matter of fact Trevor is the son of ABC (Auto Body Craft) founder Bill Powell and he has a wealth of old pictures, documents and other information that he is willing to share. What's interesting is that according to Trevor no less than 4 of the three-wheelers were equiped with the square nose section in Clubman style. And the green car of which I wrote it was non-standard (this one) was one of them. Oops!

In fact Trevor owned an ABC Tricar himself at one point and that, too, came with a Clubman style nose. And he found a picture of it, too. Trevor writes: "I could only find one picture of 'BFD 88J' my second car with the Clubman front, taken in 1973, it is just visible. That's me in the picture with my wife Melanie. We were both 18 then and have now been married for 35 years. Flared trousers and 5J Cosmic alloy wheels and Dunlop SP68 tyres... those were the days!" Fortunately his love for Minis hasn't faded over the years, as he continues: "I am currently restoring a couple of ex British Vita 999cc 8-port, ETCC Minis, KDK 320F and HDK 443E" Pretty nice too, Trevor! And thank you once again. 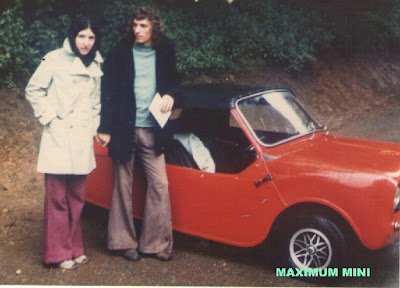