A rare ABC Tricar has turned up on eBay this week, but unfortunately the Mini based three-wheeler is in a terrible state and has a non-original repro 'Clubman' nose. However, it made me wonder again if somebody knows of a Tricar that is slightly more photogenic, as I'd love to shoot one on my next visit to the UK. In my own archives I found details of five cars (you may note that they all come with local - Brierley Hill, Dudly - registration numbers!) and you can find out more about these below. Any help in tracking down a good example of the breed would be very much appreciated. 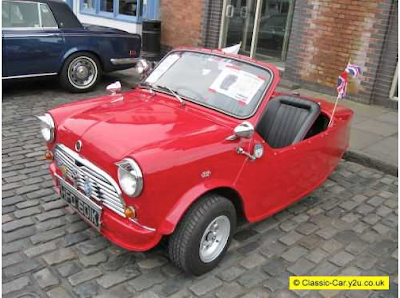 An ABC Tricar as seen in Leek, Staffordshire in 2008. Who knows its whereabouts?
Picture courtesy John B./classic-car.y2u.co.uk 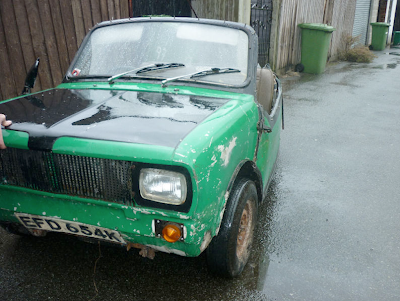 The eBay ABC. It's non-standard and very rough. Too bad for the book, unfortunately

UPDATE 6 september 2011: Trevor Powell, son of ABC Tricar designer Bill Powell, has a wealth of information about the Mini based three-wheeler that he is willing to share. See here

UPDATE 2 November 2011: Nothing heard of the man who reacted to this article, but by now I am in touch with the owner of the red car.