More about the German Landar R7

In May this year I heard about a forgotten Landar R7 that was supposedly found in a lock-up in Germany. I wasn't able to find out much about it at the time, but wrote this little feature on the find (click here). Meanwhile, I have been contacted by the car's new owner Guido Enderle. He sent over a stash of pictures of the car as he found it and came up with some lovely historical photographs, too, from the days when it was raced in the German Interseries and in German hill climbs.

As for the car's history goes it was actually the car raced by Frank Aston in the UK in 1970 and 1971 (see here). After that it came to Germany in 1972, where it was campaigned by brothers Peter and Heinz Hardt until 1975. After that they replaced it by a Landar R8 and the R7 disappeared from the radar. Guido: "I spoke to Heinz Hardt who confirmed it was him who carried out the modification to the engine and Hewland Mk8-gearbox, using an Austin-Healey Sprite-crankshaft and a special adaptor from Hewland. The engine which is actually in the car is a race engine but has "only" one Weber carburettor with a huge intake manifold. Heinz Hardt told me that they ran the car with a special cast iron 8-port head and 2 Weber-carbs, later on they used an aluminium head with 4 Amal-carbs! Is it possible to find such a cylinder head? Any help will be appreciated. Heinz Hardt was very excited that the car has reappeared."

My friend Carl Braun, who races another R7 in the States, said: "That makes four currently known and possibly all of them. In the year 2000 I talked with Peter Radnall who confirmed he thought four were built. I’ve actively raced Landar R7 (chassis number 70411) in the USA since 1999. I also have a friend in USA who owns a second R7, which is modified and now has a motorcycle engine and different body. I talked to him this evening about if he knew the serial number and original gel coat number of his car. He doesn't. We do know that John Hill, the USA importer raced it for a couple of years. Then there is the red car in Japan that Jeroen discovered (I haven't written about that on these pages but will do that - JB). That makes four. I’m not sure which car was the first. Based on info I studied yesterday my car possibly/probably was the first. I have the original design drawings and dates and based on design dates, and when me car arrived in California (April, 1970) it would almost have to be the first shipped. The factory moulds indicate four cars were built in this sequence of colour: white, blue, yellow, red. I plan to look at the photograph of the car in Germany and compare it to the original sales brochure, and to the frame in my car for differences. Anyway it is absolutely great to know this car exists!"

It surely is, and I can add now that this car wears chassis number 70912 and looks to have been blue, which both indicates that it would have to be the second R7 made, probably in September 1970. 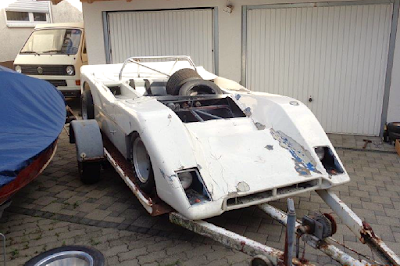 Hidden for decades in a German lock-up, this Landar R7 came out this Spring
Picture courtesy Guido Enderle 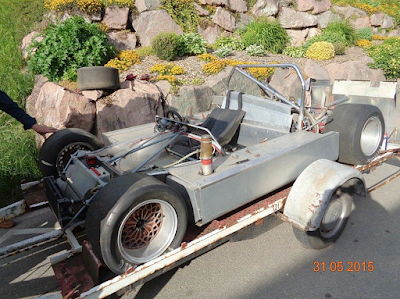 Like body, chassis and suspension are all original as it was last raced in 1975
Picture courtesy Guido Enderle 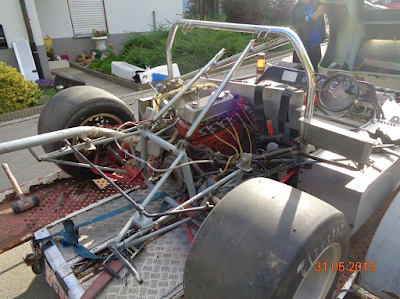 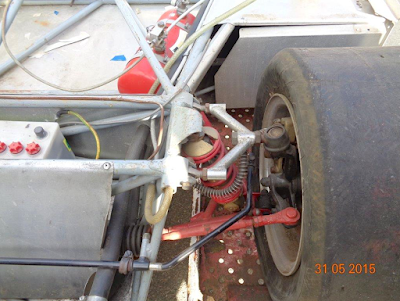 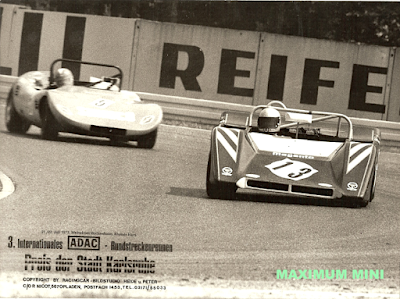 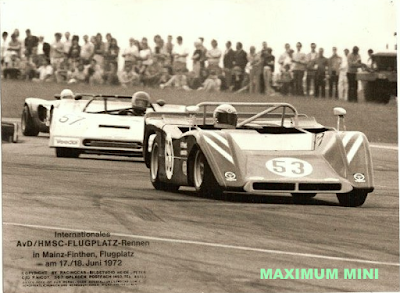 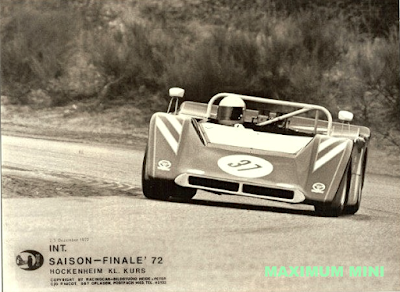