You have undoubtly heard of the Unipower GT's nickname 'Mini Miura', made up after a French journalist described it as such in his magazine report. But how about the 'Mini Countach'? I did not know it existed but after I was sent numerous messages that a most unusual Mini derivative ended up on good old eBay this week I noticed some definite similarities between the two thoroughbreds: the bull from Bologna and the Bison from Blighty, 'cause that's what it is named.

So what really is this Mini Countach thingy? Well, apparantly it is the one and only CJC Bison and is registered as such on the DVLA database. It was built (or at least finished) in 1994 and MOT'd until June this year. The current owner has recently decided to sell it and I have been in touch with him. Unfortunately he cannot tell me much more about this intriguing one-off creation, so that leaves me with more questions once more. See the ad here. Oh, and excuse me for the Photoshop fiddle on the picture attached. I just couldn't resist doing that... 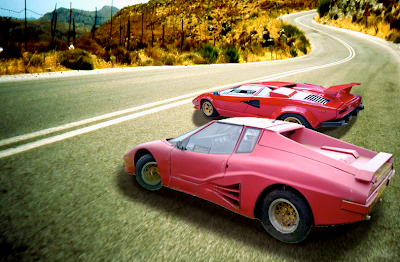 Thoroughbreds? The Bison from Blighty and the bull from Bologna
Geplaatst door Maximum Mini op 21:29