It's been busy. I have returned home doing stories in France, Germany and Switzerland and had a good time with some very unusual cars there, although unfortunately none of them Mini based. However, I had to think of one while passing some wonderful Swiss mountain villages on the shores of the Lake of Konstanz. It's been a while since I found out that Switzerland had an official importer for the Stimson Mini Bug and I had one rather incredibly 70's picture with a man wearing a cap that even made Jackie Stewart look meek. The side of the car mentions 'Carrosserie Brühwiler Luzern', and 'Bausatz ab fr 3400,-' meaning 'Kits from 3400 Swiss francs'. I never found out who this company were and if they ever sold any kits or cars. My newly purchased collection of Automobil Revue year books make no mention of it at all. 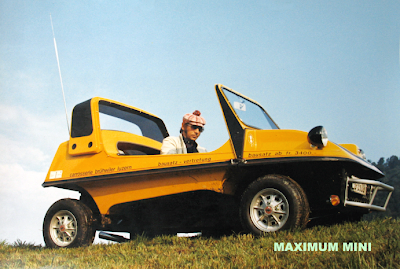 Very '70s in a Mini Bug Mk2: Jackie Stewart eat your heart out

But funnily, arch Mini derivative fan Paul Wylde surprised me when he sent in a similar picture that clearly shows the same car and probably the same man although now on the shore of a Swiss lake and with (I think) full jet ski gear in a fitting colour. Now that's even groovier! It makes you feel all ready for the Summer, or at least that's what I thought. But who knows more about this Swiss Stimson importer? Apart from these pics I found two shots of a pink Mk2 Mini Bug in Switzerland on the internet, this one wearing a Zurich registration. It could be the same car... 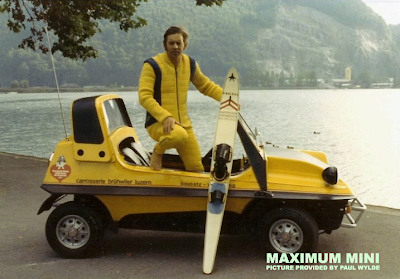 Another Swiss Stimson Mini Bug Mk2. Or could it be the same car?
Geplaatst door Maximum Mini op 14:15