So what's the story behind this Cox GTM?

I had several people asking me about a car that is currently offered for sale on eBay: a Cox GTM that is fully race prepared for its current owner (see here). Do I know it? Yes, I do. And what do I think about it? In fact I cannot say other than that it is beautifully and professionally built and looks the part, too. So why is it so expensive? Compared to other GTMs you may have seen it is expensive, yes. But then, this car is fully race prepared. I'm even convinced the seller won't make much of a profit on its £15,750 asking price as the time and budget spent on it were not particularly tight. In fact I have seen it being built over the last few years.

So why is it being sold? I phoned up the owner to find out. And it's quite a story. Let's start at the beginning. He used to race a Lenham bodied Austin-Healey Sprite in the FISC competition, which he won in 2006. After that the Sprite was sold (that's what happens to winning cars, isn't it?), and it was decided to build a new racing car. That's when the Cox came in. The car was sold new as a kit from the factory to a RAF engineer, who built it for night rallying - popular in the late 1960s/early 1970s. But when he was away on duty overseas a friend borrowed it for a rally, only to go off in the first corner. The owner was so annoyed that he decided to put the car away in the garage. This was 1974, and it did not come out untill 1997 after he'd died. Next, his wife and brother decided to have it rebuilt and they started work, had all the panels in the tub renewed and repainted it yellow. They almost got to the point of having it finished, but decided to sell it when the current owner came in. He took it over to have the restoration started all over once again and have it fully prepared for the racing track. Last year it was finished. It comes with 1380cc race engine, Quaife close ratio straight cut gearbox and limited slip differential, and just about all the running gear new or rebuilt. The colour was changed back to its original blue.

So, once again, what made him decide to sell it? The answer is simple: after all these years he is not into racing cars anymore after having become a father, twice. He does still compete on the track but now in classic karts. So don't say you always upgrade to bigger cars in competition! Receipts of all the work carried out come with the car and I am told the total of all these is exceeding the current asking price by some 60%. A nice detail is that all the old invoices are with it, too, even the original bill of sale of 1968. I am pretty sure the market for this race prepared Cox GTM is very limited, and so does the owner. So if it won't be sold in the end, he will keep it. But if you are after a car that is ready to race and are fed up with all the Sprites, Midgets and Mini Coopers on the grid, then this could be a rare opportunity indeed. 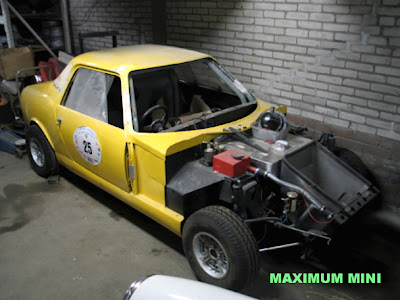 Work on the Cox GTM is half ways here. Note air intake at the front
Picture Jeroen Booij 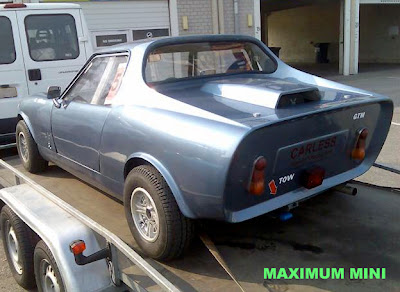