Discussing Mini based campers with a reader of this blog yesterday I thought it was about time to write something about these camping creatures here. There have been a few. The Wildgoose camper conversion are of course best known of them all (there were two variants, the tall one even quirkier then the other). But there was also the Murray Caravan Company building similar vehicles from a place called Orrell in Lancashire (who knows more?). And then I have also heard of a thing called the Pickaback Coachbuilt De Luxe of 1965 (again: who knows more?). But best of them all has to be the Euxton Caraboot, built by Euxton Coach Craft in the village of the same name in Lancs. This rather incredible vehicle combined a Mini with a camper, a caravan and - can you believe it? - a boat! I have a sketchy copy of the 1965 brochure ('Join the mobility without hotel worries!') but the web provides us with even better stuff: a lovely British Pathe movie in full technicolor. Click here to see it. We are going on a Summer holiday, la la la...

UPDATE: want to know what it was like to take the Caraboot out on a holiday in '69? Great story here 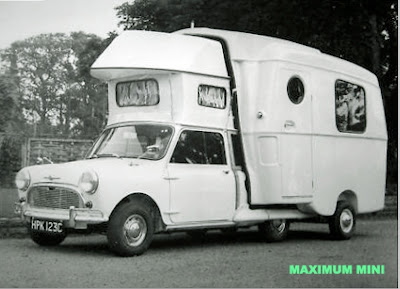 Press shot of the Euxton Caraboot. Note paddles behind doors and boat on roof top 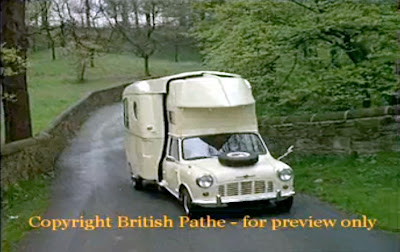 Road holding, anyone? but who ever said a Mini was not roomy enough for camping?
Picture courtesy British Pathe
Geplaatst door Maximum Mini op 20:08