Classic and Sports car magazine values their current cover car - the Aston Martin DB4 GT Zagato - at 6 million pounds. Whopping indeed. So if you ever spin your humble 10" wheels on road or track and come face to face with one of the 20 built, thundering along, try to avoid it at any risk. It must have been what driver D.E. Boler did when he came into a close encounter with T. Leake's 'GTZ' back in September 1968 at Oulton Park. Boler was driving a Cox GTM, most likely one he'd built himself from a deceased Mini plus a 330 GBP kit supplied by Cox & Co in Hazel Grove. At the time Leake's Aston (that's it) must have been worth slightly less than it is now (the price when new had been some 5,500 GBP years earlier). Never the less, I think the Cox GTM is rarer these days. Being slightly mad about the Cox I think I may prefer it over the Aston after all. So do let me know if you have it and want to get rid of it.
Thanks to Richard Heseltine for sending in another great picture! 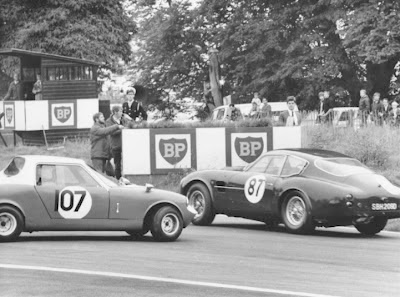