Some of the best messages I receive here are from people who have owned or built Mini based cars in their heydays. The one I got from David Bellis, a retired Brit living in France, ticks both boxes as he built a Stimson Mini Bug in 1971 and used it as a daily driver for a while. He wrote: "Hi Jeroen. I've loved Minis for 40 years and the more unusual, the better! In 1971, my dad's friend ordered a red Mini Bug kit complete from Barry Stimson. I went with him to collect it from a farm in Emsworth, near to the South coast. Barry was working on the 6-wheeler when we arrived, was it called the Stimson Safari 6 or something, I can't remember (it was indeed!-JB). Upon our return, we decided that we would build one also. My father copied the chassis and incorporated a few strengthening mods, vastly superior to the original. He used thicker wall tubing and my dad could actually weld, unlike the chassis fabricators! I seem to remember the chassis was £125 and we bought the steel to fabricate one for about £10. At the time that amount of money would have put it beyond our budget."

"The red one was finished and registered UDJ 51, I think. We bought a 1965 Mini Van for £50 and then started the build. Everything was completely refurbished. As my Dad was a precision engineer, there was only one way to do everything - the right way! Hence the build took some time, but it must have been the best Mini Bug ever built. I remember wanting to have 6"x 10" Mamba wheels and 165 Rally Special tyres but we just could not afford them and therefore ended up with steelies and Avon Turbospeed crossplies. After completion we had an inspection at home by a local policeman, who approved the quality of the car and allowed us to make up our own chassis number. How times have changed. After over 40 years I can't remember the number but I think it contained part of our surname, probably 'BEL'. The car was then registered and given a current registration number XED 613K. This meant that it didn't need an M.O.T. for three years. In effect a new car! Amazing! Don't ask me how, but I remember the engine number as 8AM FAU H550725. It just came to me, how bizarre is that?"

"We ran the car as our only transport for about 6 months, but pressure from mum finally forced its sale. We last heard of it from an owner in Northern Ireland. As I was only 16 or 17 at the time and had not passed my driving test, I was not allowed to drive it. This small problem did not trouble me and I drove the car around Warrington in Cheshire, where we lived. Incredibly, I was never stopped as the car was hardly inconspicuous. I remember it being quite noisy but almost fast. The engine had been properly rebuilt and the car weighed almost nothing. The hood and side screens worked very well. Vision was good and virtually waterproof. We couldn't afford chrome headlamps and settled on some black ones designed for a farm tractor. The rear lamps were trailer items. The large sticker on the roll bar was our local tyre company Warrington Tyre Distributors. They gave us a discount on the wheels and tyres in return for some free advertising. I've tried to remember as much as possible and hope that I haven't bored you with too much detail. I would love to know where it is now. I may be nearly 60 but I love odd cars now as much as when I was 17! At the moment I am part way through scratch building a Bugatti Type 35 replica, and yes, the engine is in the front where it should be! This car is going to be my best yet (I always say that!). The only sad part is that my dad has Alzheimer's and can't help me, but I try to do each bit as he would have. On completion of this project I am hoping to build a beautiful MiniSprint. Neville Trickett lives quite close and will hopefully be doing the shell modifications for me. Keep up the good work!" Thanks very much David, and let's see if someone here will be able to tell us more about your car's destiny. 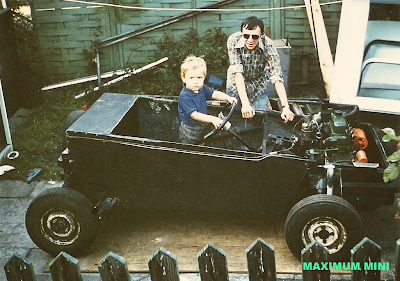 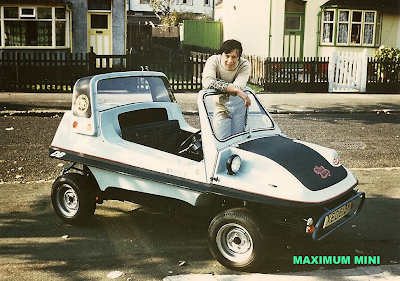 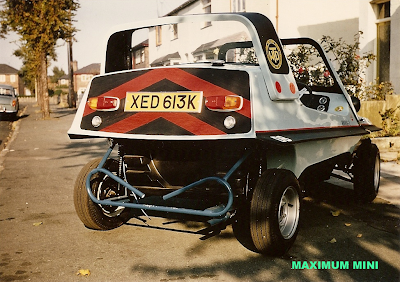 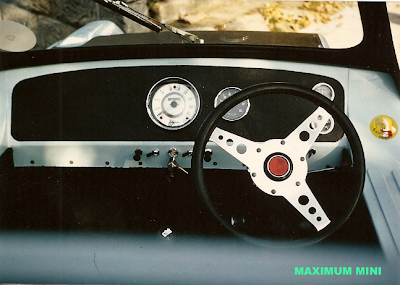 The Mini Bug's dashboard in all its simplicity. What else does a fun car need?
Picture courtesy David Bellis