Unipower related messages keep on coming here, so it shouldn't be long before another comprehensive update is made with some news about cars in the UK, Switzerland and the US. Never the less I want to share with you the good news that regular contributor to these pages (with old pictures and advertisements mainly) Pete Flanagan has been so brave to actually buy the ex-Janspeed Unipower GT that has been for sale for such a long time in Belgium! Well done Pete! I am positive the car is now in very good hands. Pete has already started to take the engine out as he plans to have it ready in its original Janspeed-guise for the Action Day at Blyton Park on May 4 this year. He also found out more about its chequered history, writing: "It's wider bodywork is typical of only a handful of Mk1 Unipower GT's produced to go racing (there's one or two others still in existence to my knowledge and they're left hookers). It's not modified , it's actually got completely different race car mouldings from Specialised Mouldings." Things started to awaken when Pete came across an old ad in Autosport magazine a few years ago (see here). Pete: "It was only then that I made the connection to this car which had been referred to as ex-Janspeed. In fact it had been for sale a while in Belgium but with a very misleading description which hinted very strongly at the car having been entered for Le Mans in 1969, which I soon found out was untrue."

"I then remembered seeing the Janspeed car in an old copy Cars and Car Conversions which a mate duly lent me which when compared to other photos I'd uncovered of it racing in the late 60's all came together to reveal it was indeed the Janspeed car that Jan Odor bought in the late winter of 1966. He bought it to prepare for their works driver Geoff Mabbs to race in 1967, which he did at several circuits including Brands Hatch, Castle Combe etc. They also took it to the very first Spanish F1 Grand Prix held at the brand new Jarama circuit." Pete has been trying to get in touch with Jan Odor, but an answer hasn't come yet. "I have spoken to the car's next owner Brian Harvey, the ad manager for Cars and Car Conversions magazine, who whilst round at Janspeed writing an article for the magazine on Unipower GT's saw the car parked in the corner of the garage. After a chat with Jan a deal was done for C&CC to buy the car for Harvey to run in 1968 with their sponsorship and also Grand Prix Models , Harvey's model making company which is still in existence."

Pete has a lot more to tell about the car and its subsequent history, but is currently busy working on it. The engine's already out of it with the Cooper 'S' block and crank being returned to it. The best thing is that this lovely motor will make it to Blyton Park in its resplendid Janspeed livery in Tartan Red. Pete concludes for now: "I am really looking forward to returning the car to it's Janspeed spec and filling in all the missing history. We will also have the Le Mans Unipower on track with mine at Blyton, plus two other road cars." I am currently talking to another two owners who may want to bring their cars to the Action Day, so who knows we will end up with a Unipower GT display previously unseen before. Gather 'round, gather 'round! 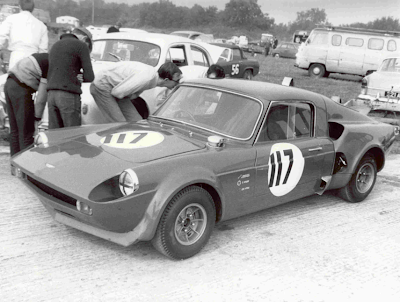 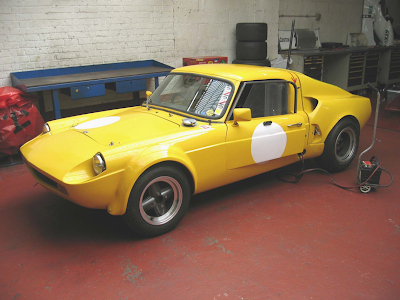 Spot the differences. This is what it looked like in the last two decades or so…
Picture courtesy Mark Butler
Geplaatst door Maximum Mini op 09:55