It's been quite a while since I posted something Camber/Maya related. Avid readers may remember the Camber/Maya files that came along here in 2011 - still integral to be found on these pages. One of the cars described was the Camber GT registered RLL 8L (see here), which has quite a nice slice of heritage. Fletcher owner Paul Ogle sent me a lovely picture of the car at speed that I'd never seen before. It was taken during a race at Brand Hatch in 1967 and with it came the description: "The next class gave us a preview of a new car. This was the Camber GT of John Green, previously known for racing a Mini Marcos. John's new car is also based on a Mini, but looks more substantial than the usual Mini-based GTs." The car is owned these days by Bryan Purves, who I hope will bring it along to Blyton Park on May the 4th.

Josh Willis - the chap who recovered the Maya GT that was found in an Ashford field in 2012 (click here), hopes to do so with his car. It was the Find of the Year back than and I asked Josh if there's any progress in the restoration, which unfortunately there isn't. Josh wrote: "Nothing to report I'm afraid. It is currently just tucked away in storage. I will let you know as soon as I make a start on it." However, Josh hopes to put it on our Mini derivatives display at Blyton Park: "I will come over for sure. I might be able to bring the Maya on the trailer, people might be interested to see it." I surely am! 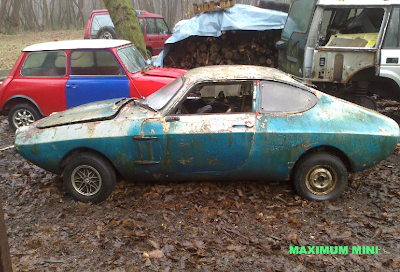