This story is not so much about a Mini derivative as it is about a much modified Mini Moke, dubbed 'World's most fun and quickest Moke'. It was sent over to me by Robert Philips who lived at Hawaii at the time, and I think it's worth an entry here. Decide for yourself! This is Robert's story:

"Many years ago, I acquired good old 895551 from the Budget Rent-A-Car people in Honolulu after a rental driver apparently tried driving it without any radiator water and with very little engine oil. Hence the price of $115.00 was about right seeing as how the engine was really and truly seized solid. My poor unsuspecting bride suddenly found herself driving a temporary tow car with a forlorn Moke at the end of a rope." 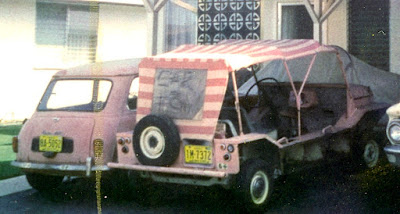 "It required a complete body refurbishment and rust repair including a new paint job. The Hawaiian climate may be absolutely ideal for the human body, but a British car body covered with maybe one transparent coat of thin paint is no match for that humid climate. I performed a heart transplant with a Mini Cooper 1275 'S' donor with some internal custom goodies. That was followed by altered suspension, slightly larger wheels and tires and a simple roll bar. I then made custom fitted seats by sitting in Saran Wrap laid over fiberglass cloth and resin which had not yet set up. That is one way to learn that fiberglass resin setting up is an exothermic reaction, and will toast your backside as quickly as the Hawaiian sun. The refurbishment job was topped off by a lowered steering wheel and a new dash panel made from my wife's cookie baking tin taken when she wasn't watching. In the Hawaii autocrosses it upset the applecart for the local perennial class winners and was quickly moved from class D to C to B to A and then to 'All Modified' where it often competed for FTD runs. The NHRA timers at Hawaii Raceway Park certified a 15.27 elapsed time for the quarter mile." 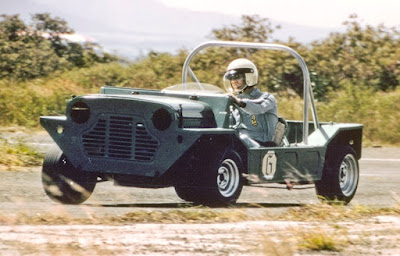 Second incarnation: the Cooperized Moke is now taken to the track. Why not?
Picture courtesy Robert Philips

"After a Navy move to Pennsylvania in 1972 the car received some major work. A rigid roll cage was added. To a 1275 Mini Cooper S motor I added the two dual downdraft Webers on my custom intake manifold, an Iskenderian cam, magnesium push rods, high compression pistons, custom headers, lowered front and rear suspension, wide wheels, very wide CanAm qualifying tires, a very rigid roll cage, Mini Cooper disc brakes up front, custom fit lower seat, bench flowed cylinder head, radiused valve seats, fuel cell,and Koni shocks and ended up with the worlds most fun and quickest Mini Moke. Note the front tires are two inches wider than the rears, they were used CanAm qualifying tires I bought at a great discount from Roger Penske. Great adhesion as they really got very gummy when hot, my son's job was to pick out all the rocks and gravel which had vulcanized to the tire after each run. They were the same rolling diameter as the original Moke tires. Cornering was truly unbelievable. Top end was geared for about 88 mph at 6700 RPM and could leave rubber in third, and would take tight corners faster than you would believe. The super wide wheels and tires gave the car a definite visual relationship to the then popular toy cars for kids called Hot Wheels." 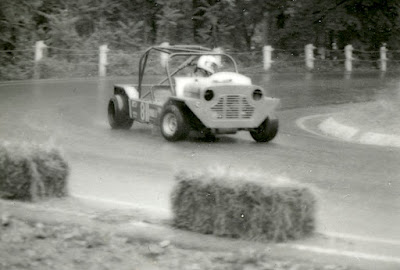 "It has been an absolutely incredible car to drive. It will thirst for faster and tighter corners long after I have run out of bravery. In 21 autocrosses and 10 Pennsylvania Hillclimbs it has earned 16 First Place (including 5 Fastest time of day runs), 11 Second place, 1 Third and 3 Fourth place finishes with no DNFs. After taking an FTD in a Corvette Club sponsored autocross in Virginia Beach the car was dis-invited to any future Corvette Club sponsored activities. Some of these events earned the SCCA Northeastern Division Championship in the Solo I “E Mod" Sports Racing class, and second place in the Pennsylvania Hillclimb Series in Mod I, ( a class for any modified production car or any race car under 1300 cc displacement)." 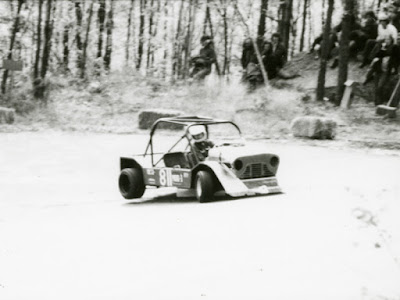 "The slightly more aerodynamic front end treatment happened after a Giants Despair Hillclimb during which event I demonstrated the value of six point seat belt/shoulder harnesses. That was accomplished by using a snow fence and earthen embankment to stop from about 40 miles per hour in about four feet. The test is not to be recommended if you have any regard at all for your neck, and will definitely rearrange the front end of your car. Also added some lexan deflectors under body and at base of the shovel nose to 'enhance ground effects'!" 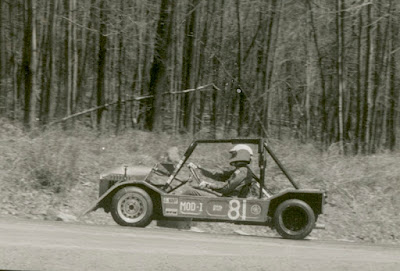 "The four carburetor stacks were very scientifically designed by hammering a towing bar ball into the end of some copper sink drain tubing to make a flare, and then finding a chrome shop. With less than $1,200 invested, the Mini S Moke proved to be a very good value for the money, more so if I were able to melt down some of these dusty trophies. So you see, one need not have a Ferrari or a Lotus to have a ball on four wheels!" 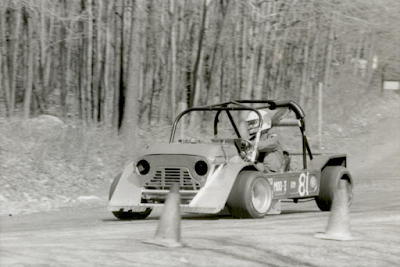 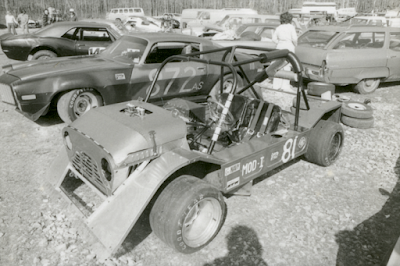