Once again, our Jersey reporter Gary Buesnell is on to something. And once again, it's a celebrity owned coachbuilt Mini that appears to have vanished. Gary wrote: "Take a look at this Mini. This picture is from the Jersey Evening Post, this time from August 1979 when they ran a feature page on the Mini's 20th birthday. This Mini was black with narrow 'gold' pin striping around the doors/sides etc. As the description suggests it was originally built for Cliff Richard, probably the black Clubman that was used in his film 'Take me high'. The timescale fits as the film was shot in 1973 and released in 1974, I believe. The film car was mildly modified with Sundym windows, Webasto type sunroof, alloy wheels and I recall there was a Radio Telephone (PYE Westminster) fitted in the car that Cliff used in one of the scenes. The aerial was fitted on the driver's side rear by the boot and can be seen in the film - clip attached."

"By the time the car had made it to Jersey, the wheel arches and striping had been added and it had been deseamed and still had its Webasto type sunroof, rear wiper etc. The car still had the PYE Radio Telephone fitted which would have been a very expensive feature in its day. The aerial was in the same location which adds to the consistency. The car was Jersey registered but it left the Island in the mid eighties. I recall seeing it frequently outside where the owner lived and parked at the airport in the car park frequently, presumably when the owner visited London/financial business."

"I am sure it didn't have Wood and Picket badges anywhere outside or in the car on the steering boss etc but it had W&P arches and nudge bars front and back. I did see a post on the UK mini forum in 2013 where someone reckoned they had come across Cliff Richard's mini, however all that was left was the roof and a few panels…?"

"It is astonishing that for an island, 9 miles x 5 miles with a speed limit of 40mph, there is a wealth of motoring history. It never ceases to amaze me. I am interested in Minis but the same stories go for other cars that have found their way over here. The last Lamborghini Miura and AC Cobra made were owned by a local resident. The Cooper streamlined cars were made and developed by a garage in Jersey for John Cooper and the fibreglass moulds were made in Jersey, someone found one of the originals that was being used as a fish pond at the bottom of their garden! All members of Led Zeppelin, the rock group, lived in Jersey and the lead singer apparently gave his Maserati (Merak I think) to a friend on the Island rather than take it back to the UK. I could go on! Anyway, let me know what you think about the Mini." 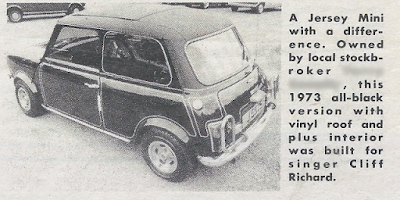 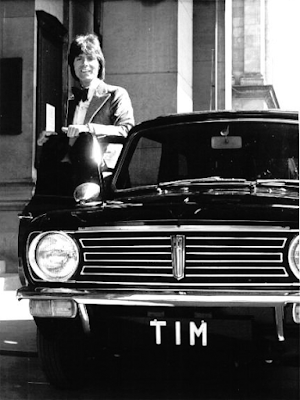 And with the man himself, now with a fake registration plate?
Picture BBC