Kelley Special turns out to be Delta S2 Special

Faultless books do not exist, and I'm aware that my own books contain errors as well (not many, but still…). Fortunately, I have a loyal following of readers who correct me when I'm wrong. And Ray Potts is one of them. He wrote earlier today: "Hi Jeroen. Ray Potts here from Australia. I recently received my copy of Maximum Mini 3 and it's a fascinating read. One glaring error leapt out at me, however. On page 58 you show a 'Kelley Autotest Special'. I recognise it, but not the description. I'm not sure where you got the information on this but unfortunately it's 'a fair way off the mark' as we say in Australia. This car was active in Motorkhana (not Autotest) in Australia for many years. Called the Delta S2 Motorkhana Special it was originally built by Peter Jarram in 1988.

Peter sold it to Bill McCarthy in 1992 and in his hands it achieved the results at both State and National Championship level as detailed in the specifications below. Over time it was modified and/or improved by several Mini Experts here in Melbourne, Australia, before Bill sold it to David Kelly in 2014.
David sold it to Steve Ormond and Greg Dobson in 2015 after using it only rarely I believe. Incidentally, Bill identified the helmet hanging on the roll bar in your photo as being his, complete with a 'dust blocking bib' attached. Here are the specifications of the car as it was when Bill sold it to David in 2014. Also attached is another photo of the car.

I'm not trying to be a purist or start any arguments about this, but since this car has played such a big part in Australian competition history, as well as being a superb example of how Mini components can be developed for a specific purpose, I though perhaps you'd like to know more about it.

Cheers, and thanks for your Mini Passion, Pottsy."

Thank you Ray. And feel free to correct me anytime. 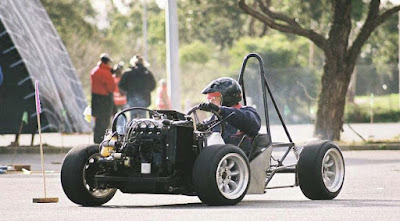 This is not - I repeat; this is not - the Kelley Special. What we see here is known as the
Delta S2 Motorkhana Special, built by Peter Jarram in 1988
Picture courtesy Ray Potts