It's always the best to get information from first-hand sources. And it's a bit of a break-through to find such a person that single-handedly designed and built a Mini based car, or more of them. But I had not been able to get hold of Scotsman Terry Smith so far. Terry is the man behind the 1971 Metron, which is fully featured in Maximum Mini 2. A fascinating car with gullwing doors and Mini power. I photographed it with its current owner in Austria and was lucky to find out more of it thanks to an old clipping from a local newspaper. But so far, I had not been able to track down the man himself.

Imagine my surprise when a Terry Smith dropped me a line recently about a Unipower GT project he was working on. Did he happen to be the Terry Smith of Metron-fame? Yep, he was. And he turned out to be still a great enthusiast, too, with several projects at hand. He bought my books and a poster and they arrived on time before Christmas. Terry wrote: "Many thanks for the Maximum Mini books which have been a great read over the holidays. I was very impressed with your entry on Metron, which brought back many happy memories! The poster is wonderful also, lovely to see Metron joining such other impressive creations. Incidentally Motor magazine also printed a two-page article about Metron at the time. I have a copy somewhere and will send you a scan when I locate it. I also noticed that you mentioned Circa in the Metron article. I went on to build several Circa models. The first had a central driving position (several years before the Mclaren F1) with passenger either side, and two small children's seats behind. It had a transverse Ford mid engine layout. A further evolution had a twin-turbo Rover V8 mid engine and ground effect aerodynamics. I tested this in the MIRA wind tunnel, and it generated significant downforce front and rear. My latest Circa is the Charterhall Speedster which is an update on the Jaguar E-Type, with more modern lightweight Jaguar parts."

It's good to finally be in touch with you Terry! 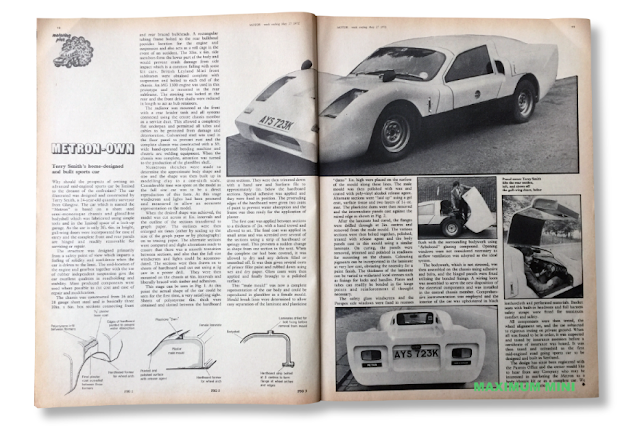 Terry's creation, the Metron, made it to a two-page spread in Motor in 1972, seen here
Picture Motor magazine, via Terry Smith 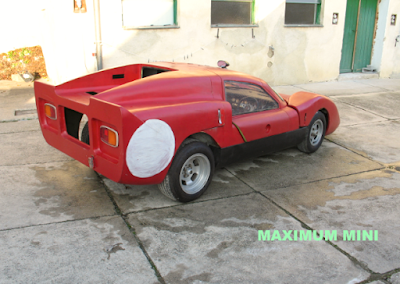