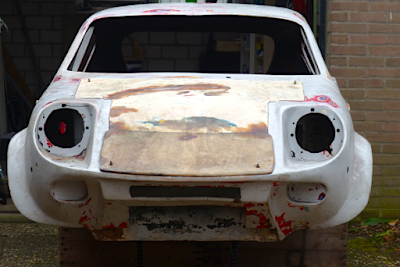 I have to admit that it's no big surprise that the Mini Marcos Le Mans car won the title of Best Find of 2016 with 89% of the votes. As you will know the car is owned by your's truly and I will keep you updated on the project of bringing it back to its former glory: that of the Summer of 1966, when it was famously raced at the circuit de la Sarthe. In the meantime, I have been totally overwhelmed with reactions, some of them leading to more information about the car's checkered history or even to parts that were fitted to it originally. Thanks also for voting, not in the last place to the brave people who chose for one of the other four cars that made it to this year's poll.

And then there was the traditional Maximum Mini Christmas puzzle. Won once again by Neil Kilbane. Congratulations, Neil, a book is on its way. Just let me know what I can sell to you as you are costing me far too much! The right answers were: