Just a little update on the Le Mans Mini Marcos project.
First of all: thanks to everyone who contacted me in the last month or so regarding the car. I have now bought the first (rare) parts and have been offered several more. Keep the offers, ideas, suggestions and photographs coming!

The plan is now to sand down as much as possible from the layers of paint, without damaging the gellcoat but with the possibility to see how much of the original blue and yellow plus the white racing roundels is left. I believe it's all still there.
In that state I'll bring it over to Blyton Park on April 30th, where you are all welcome to see it in the flesh on the Maximum Mini display, joined by many other exiting Mini derivatives!

Right after the show it's coming back to Holland where it is going to be soda blasted. After that it will be dried and primed in 2K epoxy primer in order to prevent blistering. More to follow. 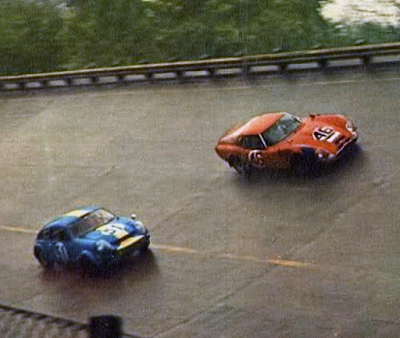 The Le Mans Mini Marcos, seen here during the 1966 Monza 1000kms race - about to overtake the Autodelta Alfa TZ2 from the inside? (which did not finish by the way)
Picture Auto Italiana magazine