After partnering up with Mini World Center in southern France for the mechanical side of the Le Mans Mini Marcos project (story here), I am now happy to announce another partner: Seventies Car Restoration in West Yorkshire, UK. This company, run by Peter and Paul, will be working on the car's body and return it into its full splendor, just like it was in June 1966. Apart from a passion for Le Mans, Peter has a Mk1 Mini Marcos himself, which he beautifully restored from scratch. I started a conversation about soda blasting with him and what followed was a lengthy discussion about all the pros and cons. Eventually we decided not to have it soda blasted, but have all the paint rubbed down by hand. By this time much of it has been removed and I receive a phone call from Peter regularly now, when he has found another piece of evidence of its racing provenance. Holes for the bonnet straps and the roof stiffener have come up, exactly like they should. Peter is exited every time. To speak in his own words: "This car is constantly talking to us!"

Some complications have turned up already, too. I knew the car's rear wheel arches were modified, but I hoped they had just been filled in. Unfortunately it now turns out that they have been altered quite a bit more. The original arches were in fact partly cut away, with new ones pop riveted over that and all of it filled in. They are probably beyond repair. And since the original arches aren't available, we need to find another solution. We think we found one, but it's not going to be too easy. More about that soon.

And so, work is in full swing. While Philippe Quiriere of Mini World Center, has started on the engine build, Peter and Paul have now exactly colour matched the original French Blue and Yellow that will be applied when the body is fully restored. There is a lot to do before that though, so expect plenty of updates. I am going over to Yorkshire soon to see the body in its bare gellcoat and discuss all the repairs that need to be carried out with Peter and Paul in detail. Stay tuned. 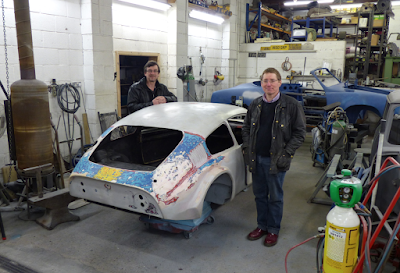 Paul (behind the car) and Peter with the Le Mans Mini Marcos just after I brought it over to their place in West-Yorkshire. They run Seventies Car Restoration as a team
Picture Jeroen Booij By now, they have taken much of the paint off. If you look really good you can see that below the front arches there is more French Blue paint. Correct, as they were modified before the Le Mans 24 hours. At Le Mans Test Day in April '66 the arches were not yet so wide
Picture Peter Skitt / Seventies Car Restoration

Le Mans Test Day (3 April 1966) on the left and just before the start of the Le Mans 24 hours race (18 June 1966) on the right. Note the modifications carried out on the front wheel arches, together with some more changes
Pictures Jeroen Booij archive 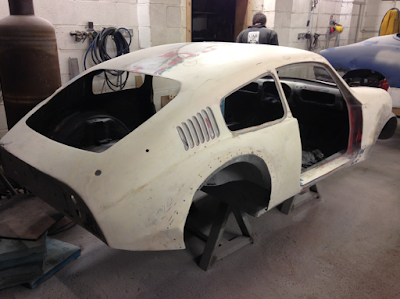 Rear wheel arches are proving to be quite a bit more of a complication, though. They were heavily modified, partly cut away and with new ones pop riveted over them
Picture Peter Skitt / Seventies Car Restoration 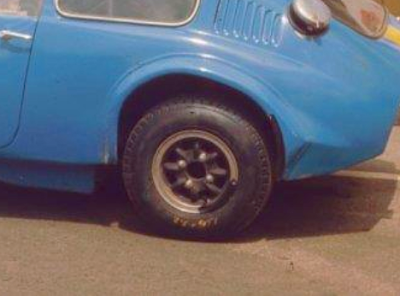 This is what the original rear arches were like and that's how they will be once again!
Picture Jeroen Booij archive