Peel moulds believed not to be the originals after all

I make updates on my articles regularly, but thought this one deserved a posting on it's own. It is about the Peel Viking moulds of yesterday's story (click!). And they don't seem to be what they claim.

Viking owner John Fischer contacted me: "Regarding the Peel moulds: I made enquiries with someone I know about the moulds when they were offered for sale on Ebay. This is their response: Hi John, No they are not the original moulds from Peel. Those moulds were sold to Bill Last of Trident cars in the late 1960s. These blue moulds were made by the ex-employee of Peel Engineering George Gelling from a car on the IOM so that Neil Hanson from Douglas could build himself a car (as seen here - JB) (his Viking is claimed to be an original car but it is not). I bought the moulds in about 2004 from Douglas on the Isle of Man. Several bodies have been made from them. At least 7 to my knowledge. The red car in the Ebay listing was an original car I restored for Jeff Lane in the USA (as seen here - JB). The roof was so bad I put a black vinyl top on it to hide the wobbles. I have pictures of it when I bought it and during restoration. Grant Kearney can vouch for this as he saw the car un-restored. It was not made from the moulds on Ebay. I am annoyed about that claim as Jeff Lane might read it."

And so it seems that the moulds that are now in the Isle of man motor museum and the ones I wrote about in 2011 are one and the same set after all...
It make me wonder of the original set that went to Bill Last's Viking Performances could still be there, too..? 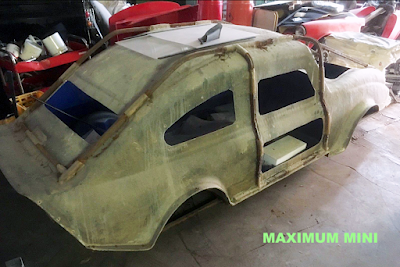 It is now believed that this set of moulds, currently on loan to the Isle of Man motor museum...
Picture Exo Sports Cars 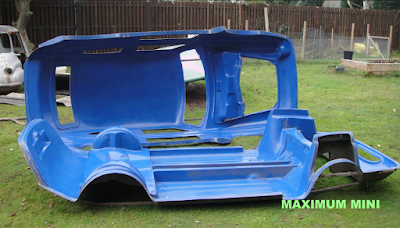 ...is the same as this set, seen for sale 7 years ago and not the original set. Where would that be..?
Picture Jeroen Booij archive