Regular supplier of images Roald Rakers came up with a grand full colour shot of the Nieuwenhuis Special, taken prior to the Trophy of the Dunes races at Zandvoort in 1968. As a Dutchman this particular car haunted me for ages (click here) and eventually I found out it was built by Henk Nieuwenhuis of Geldrop in The Netherlands, who moved to the isle of Crete later on. I interviewed him back in 2013, when he told me he built the car in 1967 in the attic of his parental house. He said: “You could either watch other people race, or build something yourself on a shoestring. I decided to do the latter and started making some drawings. It was all pretty simple, I just wanted to race. Since I had some Mini engines lying around, one of them a Cooper, I simply had to use that. I was a graphical designer by trade and so wanted it to look nice, too. At first it was a roadster, later I closed the body with gullwing doors."

Unfortunately the car does not survive since Nieuwenhuis re-used most parts to built up other cars and ultimately binned the car's chassis frame, or so he told me. But perhaps somebody has more photographs of it? I have never seen any of it in roadster form, as Nieuwenhuis didn't have these either. He did send me a few, though, of it with its gullwing doors, some of which I have added below. Roald ads: "On one of the pictures you can also see the Fiat 600D of N.P. van Leersum and the Renault Dauphine Gordini of Paul Huis-in-'t-Veld. But to who belongs the yellow Mini? Rob Petersen?" I have no idea about that, but feel free to add more information, dear reader. 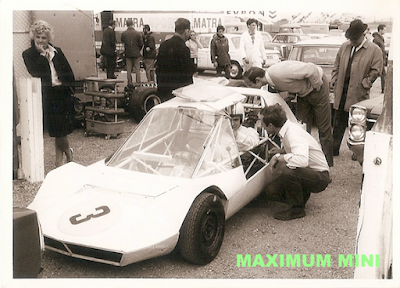 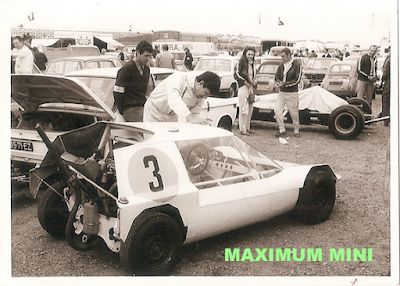 Henk Nieuwenhuis seen here next to it at Zandvoort in 1968. Unfortunately the car does not survive
Picture Jeroen Booij archive 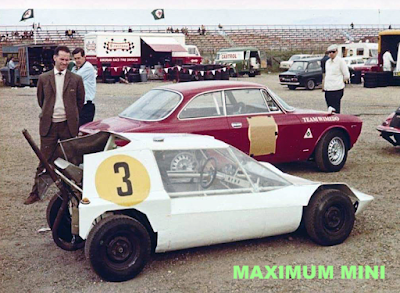 This photograph was new to me, thanks to Roald Rakers! GTA and DAF behind
Picture Henk van Zalinge archive via Carel Baller 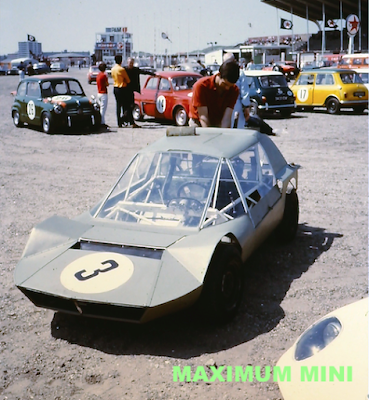 Different colour here, or so it seems, probably after this crash (click here)
Roald also wonders whom the yellow Mini could have belonged to
Picture Henk van Zalinge archive via Carel Baller