An interesting picture, made by the famous photographer Helmut Newton has disclosed the possible existence of another Mini Beach Car. The picture in question was found by Carol Quiniou who stumbled upon it in an old 1964 issue of the French magazine 'Adam' in which it is part of a series with cars and girls. Modeling with the Beach Car is Swedish-French actress Marika Green.

Beach Car prototype owner John Reymondos was surprised as he, too, never saw any other evidence of a red car. John also noted the seats, which seem to be different to the ones in the cars he knows of: "Normally the material looks more like the Fiat Jolly style seats. And the side covers inside are missing. All handles look legit though. Great research - now we need to find the car!"
UPDATE 10 AUGUST 2020: Is this the same car? 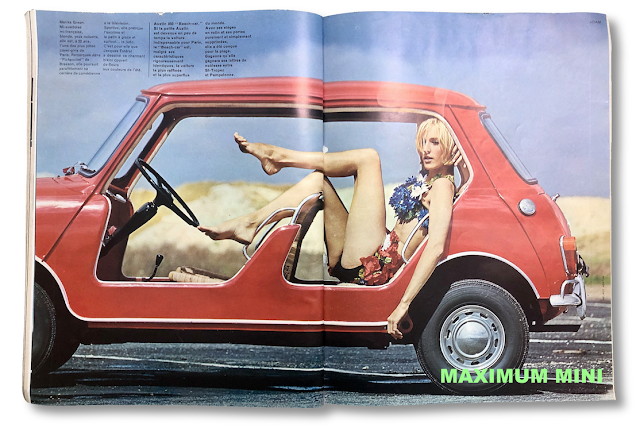 Marika Green in a Mini Beach Car in 1964. Does this car survive?
Picture Helmut Newton for Adam magazine, via Carol Quiniou